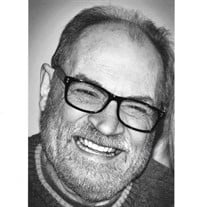 Hastings Funeral Home in Perry is in charge of arrangements for Leonard “Lenny" Stracke, 71, of Perry. Lenny died April 20, 2022 at Eden Acres in Perry. Visitation will be held Thursday, April 28, 2022 from 1:00 p.m. until 8:00 p.m. with family present from 5:00 – 8:00 at Hastings Funeral Home. Mass will be held 10:00 a.m. Friday, April 29, 2022 at St. Patrick’s Catholic Church in Perry. Burial will take place at Violet Hill Cemetery. Masks are not required but they are recommended. THE FAMILY OF LENNY REQUESTS THAT NO FRESH FLOWERS BE SENT. DUE TO ALLERGIES. THANK YOU. Leonard Henry Stracke “Lenny", son of Leonard Clement Stracke and Bernice Crescentia Coenen Stracke, was born September 7, 1950 in Council Bluffs, Iowa. Lenny attended school in Westphalia until his senior year. He graduated from Harlan High School in 1968, then went on to Barber’s School in Sioux City. Lenny was inducted in the United States Army in 1970 and was honorably discharged in 1971 after serving one tour in Vietnam. He started working as a Barber in Audubon before coming to Perry. On April 20, 1974 Lenny married the love of his life Ellen Elaine Knosby at St. Patrick’s Catholic Church. The couple was blessed with a son Nick “Buddy" and a daughter Stacey. They made their forever home here in Perry. Lenny coached little league baseball when the kids were young. He was the owner and operator of the Barber Shop for more than forty-five years. Lenny enjoyed gardening, camping, fishing, cooking, and baking. He was a member of the American Legion, Lion’s Club, Elks Lodge, Moose Lodge, JC's, St. Patrick’s Catholic Church, and was also on the St. Pat’s School Board for eight years. Lenny’s favorite thing to do besides spoiling his grandchildren was playing cards with the guys. His sports team was definitely the Iowa Hawkeyes, but he also liked the Kansas City Chiefs. Lenny and Mike Kanealy founded the Bar-Ber open golf tournament, and it lasted for thirty-five years. He was preceded in death by his parents, mother-in-law, father-in-law, and brother-in-law Tim Knosby. Lenny’s memory will last forever in the hearts of his family and friends. He is survived by his wife of forty-eight years Ellen; son Nick “Buddy" Stracke of Ankeny; daughter Stacey Massey (Aaron) of Marion; four grandchildren, Chase Stracke, Dominic Massey, Ava Massey, and Corinne Van Nieuwkerk; brother Dave Stracke (Deb) of Harlan; sisters Grace Stava (Ron) of Omaha, Diane Weihs (Gary) of Harlan, and Mary Stava (Greg) of Omaha; numerous cousins, brothers-in-law, sisters-in-law, other relatives, and many friends. DIRECTIONS TO WATCH LIVESTREAMING OF SERVICE 1. Go to your web browser and type in www.facebook.com/hastingsfuneral 2. Or type in Hastings Funeral Home Perry, Iowa 3. Click on our funeral home website 4. Click on the blue bar that says WATCH VIDEO It should say LIVE in red up in the left hand corner of the video

The family of Leonard "Lenny" Stracke created this Life Tributes page to make it easy to share your memories.

Send flowers to the Stracke family.