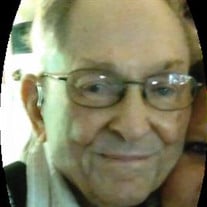 Hastings Funeral Home in Perry is in charge of arrangements for Dwight Ozbun, 89, of Perry. Dwight died in his Perry home on Wednesday, October 17th 2018. Services will be at 3:00pm Saturday, October 20th 2018 at Hastings Funeral Home. Burial will be in the Dawson Township Cemetery in Paton. Visitation will be from 1:00 until the time of the service on Saturday, October 20th 2018. Leonard Dwight Ozbun, son of Joseph Raymond Ozbun and Lena Frances Davis Ozbun, was born on the family farm near Paton, Iowa, August 14, 1929 and died at his home in Perry, Iowa, October 17, 2018. He was 89 years old. He was lovingly being cared for by his family and St. Croix Hospice. He was known by Dwight, and he grew up with his twin brother Dwaine and sister Viola. When their father died the boys were sophomores in high school, they left school to farm. Dwight loved the farm and no one could ever take that love away. He was united in marriage to Rose Maurine Hoskins February 26, 1950 at her parents’ home near Churdan. The couple were blessed with four children, Becky, Debby, Raymond and Russell. They farmed together in different locations in the Paton-Churdan area before settling on the family farm. Dwight was a hard working husband and father. He commuted to work at the Oscar Mayer Plant in Perry starting in 1965 while still actively farming. In 1972 he and Rose moved to Perry. Dwight retired when the plant closed in 1987. He was a member of the Masons and Eastern Star in Paton and Perry, and the couple were very active, supporting each other in their terms as Worthy Patron and Worthy Matron. Dwight was very supportive of his family and they dearly loved and respected him. He was always at their activities and family events. For 22 years, the whole family helped Becky with her role at Deal’s Orchard where she was a pie and dumpling maker. Dwight peeled the apples while the girls made the crusts and put them together. He enjoyed woodworking and had created many items for his family and friends. Dwight could repair the family treasures and took great pride in refinishing furniture. He was sharp as a tack until his passing, and was reminiscing about his precious farming days. He will be greatly missed as the “hub” for his family. Dwight was preceded in death by his father and his mother; his loving wife Rose in 2008; his twin brother Lowell Dwaine; two sisters-in-law Elaine Parker; Lois Galpin; and brother-in-law Ralph Hoskins. Dwight is survived by his children, Becky Glade (Ron) of Guthrie Center; Debra Allen (Frank) of Perry; Raymond Ozbun (Linda) of State Center; and Russ Ozbun (Bev) of Perry. His grandchildren will carry his special love forever~ Shelly Laughridge (Sam); Jenny Baker (Tom); Lindy Doughty (Tim); Dale Allen; Denise Dorpinghaus (Bobby); Joseph Ozbun (Kara); Ashley Ozbun; Ceslie Ozbun; Cole Ozbun; Michael Mendoza (Veronica); Nathan Thomason (Ashley); Alyson Pentico (Aaron); Megan Ozbun; Alison Rote; Haylee Rote; 24 great grandchildren, and 1 great-great grandchild; sister Viola Sturtz of Ogden; sisters-in-law Myrna Heifner (Joel); Rhea Hoskins; Betty Byson (Jim); brothers-in-law Harold Parker; Wayne Galpin; and Frank Hoskins (Claudia); nieces, nephews; other relatives and many friends.

The family of Leonard Dwight Ozbun created this Life Tributes page to make it easy to share your memories.

Send flowers to the Ozbun family.