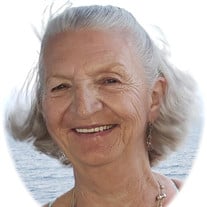 Hastings Funeral Home in Perry is in charge of arrangements for Leanna Sue Edmondson, 79, of Earlham. Sue passed away peacefully on September 17, 2021 at MercyOne Hospice in Johnston. A Celebration of Life Service will be held 2:00 p.m. Friday, September 24, 2021 at the First Presbyterian Church in Earlham. Burial will take place at a later date. Leanna Sue Edmondson was born November 25, 1941 in Earlham, Iowa to Wilbur Frederick and Vivian Christiansen Frederick. Sue was one of eight children. She graduated from Earlham High School in 1960 and went on to Thompson School of Beauty after that. Sue met the love of her life Robert Lee Edmondson “Ed” and the two were united in marriage on January 3, 1962. They started building their life together and were blessed with three daughters Jeanie Jo, Ronda, and DeAnna. Sue loved being a mom, but she loved being a grandma even more! You could always see her in the stands of any event her grandkids were in. She was their biggest cheerleader! Sue enjoyed sewing, knitting, paint by numbers, baking, and trying new recipes. She worked in Earlham as a hairdresser for over 30 years, and even after retirement she enjoyed doing hair for “her ladies.” Sue would still get together with her classmates on a regular basis, and she was always willing to lend a helping hand anyway she could. During the last ten years she had the opportunity to travel. Sue loved sitting on the beach in the Cayman Islands and watching the cruise ships come in until her dream of going on a cruise finally came true. Sue passed away peacefully surrounded by her loved ones on September 17, 2021 at MercyOne Hospice in Johnston, Iowa. She was preceded in death by her parents Wilbur and Vivian Frederick, her loving husband of nearly 49 years Robert “Ed”, her oldest daughter Jeanie Jo, one brother and one sister. Sue will be dearly missed but never forgotten. She will remain in the hearts of her daughters Ronda Clement (Doug) of Earlham, and DeAnna Radcliff (Rick) of Urbandale; her grandchildren: Chris Clement (Kate) of Des Moines, Nikki Graham (Jim) of Perry, Nick Radcliff (Michelle) of Granger, Danielle Fessler (Jeff Cechovic) of Perry, Ryan Clement (Amberlei Roth) of Collins, Devin Radcliff (Georgi Llambias) of Des Moines, Zachary Radcliff of Des Moines, Ben Clement of Grimes, Brendan and Justin Radcliff both of Urbandale; her eight great-grandchildren; her two brothers; her three sisters; other relatives and many friends. Memorials are suggested to the Earlham Fire & Rescue.

Hastings Funeral Home in Perry is in charge of arrangements for Leanna Sue Edmondson, 79, of Earlham. Sue passed away peacefully on September 17, 2021 at MercyOne Hospice in Johnston. A Celebration of Life Service will be held 2:00 p.m. Friday,... View Obituary & Service Information

The family of Leanna SUE Edmondson created this Life Tributes page to make it easy to share your memories.