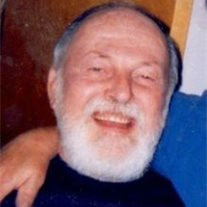 Larry Dean "Cowboy" Richardson, son of Marvin Andrew Richardson and Ruby Irene Hegwood, was born April 11, 1946 at Springlake, Iowa and died May 11, 2009 at the Perry Health Care Center in Perry, Iowa at the age of 63 years and 1 month. Cowboy, as he was known to most people, attended Jefferson schools. While growing up, he moved from Grand Junction to Squirrel Hollow and from there to Jefferson and then on to Cooper. Larry married Beverly Hilsenbeck in 1967 in Jefferson. They were the parents of Tammy, Tracy, and Joyce. On January 5, 1974, Larry was united in marriage to Barbara Millard and they were parents of Jenny, Jeffrey, Christine, and Amanda. Larry worked at American Athletic Inc. for 20 years before becoming a janitor at the East Greene High School. He started working for Rueter's Red Power in 1991 as a janitor, and he was known for making the best coffee at work. Larry was a jack of all trades. In his free time, Larry enjoyed working on cars, watching car races, putting together model cars, collecting metal cars, horseback riding, painting, doing housework, and being outdoors. He also enjoyed doing crossword puzzles, watching movies, playing BINGO and Wii, roller-skating at Springlake and Ogden, going to rodeos, his pets, and most of all, his family. Larry was a member of the Assembly of God in Jefferson. Larry is preceded in death by his dad, Marvin Richardson, on November 9, 1980, and his brothers Jerry Richardson and Doug Richardson. Larry is survived by his wife Barbara of Churdan mother Ruby Smith of Jefferson, son Jeffrey (Jackie) of Jefferson, daughters Tammy Peel (Walter) of Perry, Tracy Stanek (Eugene) of Scranton, and Joyce Hoskins (Jeremy) of Bagley, Jenny Richardson of Perry, Christine Richardson (Bill) of Ames, and Amanda Richardson of Churdan, brother Jim Richardson of Perry, sisters Donna Jensen (Delbert) of Churdan and Dorothy Smith (Zene) of Carroll, 10 grandchildren: Cory, Daniel, Courtney, Dominic, Travis, Kimberly, Casey, Anthony, Madeline, and London, nieces, nephews, cousins, other relatives, and many friends.

Larry Dean "Cowboy" Richardson, son of Marvin Andrew Richardson and Ruby Irene Hegwood, was born April 11, 1946 at Springlake, Iowa and died May 11, 2009 at the Perry Health Care Center in Perry, Iowa at the age of 63 years and 1 month. Cowboy,... View Obituary & Service Information

The family of Larry Dean Richardson created this Life Tributes page to make it easy to share your memories.

Send flowers to the Richardson family.