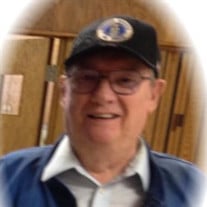 Hastings Funeral Home in Perry is in charge of arrangements for Larry Lavern Munson, 78, of Perry and formerly of Rippey. Larry died on July 15, 2019 at the Rowley Masonic Home in Perry. Services will be 10:30 a.m. Friday, August 2, 2019 at the First United Methodist Church in Rippey. Followed by burial and full military rites in the Rippey Cemetery. He is survived by his family Linda Prather John Prather, Stephanie Albright, John Munson, Dr. John Bardole, Jerry and Linda Groves, and Lyn Wilson. Larry Laverne Munson, son of Halsey and Clara Sophia Anschutz Munson, was born February 28, 1941 was delivered by Dr. W.E. Chase at the Munson home in Rippey, Iowa, and died July 15, 2019 at the Rowley Masonic Community in Perry at the age 78 years. Larry was the youngest of four children and grew up in Rippey. He graduated Rippey High School in 1959 and on October 22 enlisted in the United States Air Force. Larry served for four years, and received an honorable discharge October 18, 1963. He them served two more years in the reserves. Larry was very patriotic and justifiably proud of his service. Through the years, he was most generally wearing one of his many Air Force caps. Larry was a dedicated custodian for over 20 years in the West Des Moines school district. Larry loved sports, and was a very good baseball player, playing in Little League through High School. He was also a huge Iowa State fan, going to a number of football games there, and closely following other Cyclone Sports. Larry also enjoyed going to Minnesota with friends each summer to watch the Minnesota Twins play baseball. He was a very intelligent man, always well informed on current events, and especially what was going on in just about every sport. Larry had a great sense of humor. He was a fun guy to be with, and was always ready to join in on any fun activity. He was a good, loyal friend, and was liked by all who knew him well. Larry was a faithful classmate and could be counted on to attend alumni functions. Larry will be greatly missed. He was preceded in death by his parents and his siblings, Ronald, Charlotte and LaRie. He is survived by his cousin, John Munson (Cindy) of Ankeny and their daughter Annie Smith (Jake) and their four children of Paton, and Charlotte’s children who live in Fort Dodge: nieces Linda Prather and her children Teri Pratt and Danielle Krass; Stephanie Albright (Rich) and their children Cody and Amara Pommer and Kira and Connor Albright; and nephew John Prather (Julie) and their children John Prather Jr.; Jamie Porter; Jacob and Jenaya Prather; and great nieces and nephews. The class of 1959 can be very proud of the love and care they showed for Larry and also they can feel very blessed by his devotion to them. Memorials in his name may be sent to Hastings Funeral Home, box 204, Perry, Iowa 50220 1417 2nd St., Perry, Iowa 50220 403 North Elm, Jefferson, Iowa 50129 [email protected] [email protected] 515 465-4691 www.hastingsfh.com 515 386-8181

Hastings Funeral Home in Perry is in charge of arrangements for Larry Lavern Munson, 78, of Perry and formerly of Rippey. Larry died on July 15, 2019 at the Rowley Masonic Home in Perry. Services will be 10:30 a.m. Friday, August 2, 2019 at... View Obituary & Service Information

The family of Larry Lavern Munson created this Life Tributes page to make it easy to share your memories.

Send flowers to the Munson family.