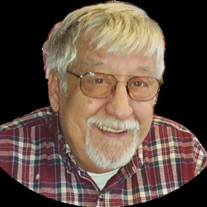 Hastings Funeral Home in PERRY is in charge of local arrangements for Ken Schumacher, 78, of Perry. Ken died at his home Sunday, October 28, 2018. Celebration of Life services will be held Saturday, November 3, 2018 at 2:00 p.m. at Hastings Funeral Home. The family will be present at 11:00 a.m. to greet family and friends until the time of the service. Keyron Robert “Ken” Schumacher, son of Leonard Henry Schumacher and Mary Catherine Bradley, was born November 15, 1940 in Emmetsburg, Iowa. Ken died at his home in Perry, Iowa October 28, 2018 at the age of 77. Ken’s father died when he was ten. His mother felt he would need a male influence in his life and his sister Theresa and her husband Leonard Buryanek graciously made a home for him in Westfield, Iowa. Ken and his Buryanek family have always been very close. Ken graduated from Westfield High School in 1961 and joined the National Guard. Throughout his life he had many careers. In the beginning his employment with the National Food Company took him throughout the Midwest. His transfer to Orange City was ‘meant to be’ as he met Linda Beth Korver. They were married August 20, 1966 and their lives were blessed with three children, Stephanie Anne, Melanie Lee and Shannon Patrick. Over the course of their marriage, their careers involved the newspaper industry and found them working together many times. Ken started in the newspaper business as a pressman in Orange City and later started The Advertiser newspaper in Hawarden with Linda’s assistance. During that time, Ken was active as a Boy Scout Leader and achieved membership in the Order of the Arrow, a scouting honor society. Later, they sold that business and Ken managed the Hawarden bowling alley. He was enticed to Perry in 1976 where he managed Stardust Lanes, later known as Kegel East. Ken rejoined the newspaper business and worked for “The Perry Leader” and later joined the Whitehead family at the Perry Chief where he worked for many years. Ken also managed the Perry Theater, worked several years for Gordy Klatt, traveling the area working with vending machines and worked for Hy-Vee, distributed the Chat Sheet with his grandson Brennan, and delivered the Des Moines Register with his son Shannon. Ken’s last job before retiring was with Home Instead as a personal caregiver. Ken was a kind, compassionate caregiver to “Shorty” Connolly of Granger. He was destined to meet and care for “Shorty”. They were very good for each other, enjoying car rides and trips for pie and coffee. He enjoyed being a “taxi” grandpa, watching his grandchildren play ball, sing, march in the band and perform in musicals. Ken was fond of his coffee times at Casey’s and coffee and toast at Lou’s Diner, always praising his Iowa Hawkeyes! He enjoyed fishing trips, gardening, yard work, cooking, and helping Linda with housework and making meals. He was a regular at Mars for chili at noon. In earlier days, he worked with stained glass and enjoyed antiquing. As his health failed, his many friends looked after him when he was out in the community. Ken was preceded in death by his parents, his brothers Michael Schumacher, Eugene Schumacher, and Leonard Schumacher, sisters Elizabeth Olson and her husband Ray, Mary Meissner and her husband Joe, Connie Seliga and Edna O’Connor and her husband Eddie; his brother-in-law and father figure Leonard Buryanek, and Doc Weinzetl. Ken’s memory will be cherished by his wife Linda, daughters Stephanie Stewart (Scott) of Solon, Iowa, and Melanie Schumacher of Perry, Iowa, son Shannon Schumacher (Robin) of Salisbury, North Carolina, and foster son Joseph Hook (Dodie) of Akron, who joined the Schumacher family when he was 15 and Ken’s loving grandchildren Whitney Schumacher, Rachel Stewart, Kyle Stewart, Elizabeth Wildes, Taya Schumacher, Brennan Carrillo, Lucas Schumacher, and great -grandson Joseph Keyron Wildes. Ken is also survived by his sisters, his twin Karen Zylstra (Sid) of Emmetsburg, Alice Weinzetl of Emmetsburg, and Theresa Buryanek of Westfield, many special nieces and nephews, cousins, other relatives and many, many friends.

Hastings Funeral Home in PERRY is in charge of local arrangements for Ken Schumacher, 78, of Perry. Ken died at his home Sunday, October 28, 2018. Celebration of Life services will be held Saturday, November 3, 2018 at 2:00 p.m. at Hastings... View Obituary & Service Information

The family of Keyron "Ken" Robert Schumacher created this Life Tributes page to make it easy to share your memories.

Hastings Funeral Home in PERRY is in charge of local arrangements...

Send flowers to the Schumacher family.