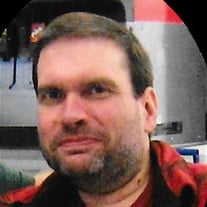 A Memorial Mass for Kevin Joseph Grow was held 2:30 p.m. Saturday, June 29, 2019 at St. Patrick Catholic Church in Perry. Visitation was from 10:00 a.m. until 5:00 p.m. on Friday June 28, 2019 and again on Saturday from 10:00 a.m. until 1:00 both at Hastings Funeral Home in Perry. Father Chris Reising officiated the mass. Burial will be at 11:00 Saturday July 6, 2019, at St Brigid Catholic Cemetery, Grand Junction. Mark Miller was the Lector. Bud Matthews was the honorary bearer. Eucharistic Ministers were Myrna Smith, Angie Farley and Ron Brown. Jan Pattee was the musician. Luis and Betzy Sandoval were the altar servers. Following the mass was a time of refreshments and fellowship in the St. Patrick School Gym. Interment will take place at Mt. Calvary Cemetery in Grand Junction, Iowa at a later date. Kevin Joseph Grow, son of Donald Glen Grow and JoAnne Rosetta Miller Grow, was born April 23, 1964 in Jefferson, Iowa. Kevin died at Mercy One Medical Center in Des Moines, Iowa, June 20, 2019. Immediately after his birth, a medical abnormality was discovered and his father rushed him to Blank Children’s Hospital in Des Moines. From that day forward, his father did everything to make Kevin’s life good. His parents were his faith warriors and his life cheerleaders. They laid out a roadmap, so to speak, that provided Kevin his great spirit and ability to cope. Kevin took everything in his stride, never felt any self pity and always was humble and courageous. His entire family loved him so much and were there for him throughout his 55 years. Kevin graduated East Greene High School and attended DMCC in Boone. During that time he moved to Boone and lived there several years. Kevin stayed busy helping his parents with their auction house and at their auction sales throughout the area. Kevin was never without friends. Kevin was very respectful of others and he was always approachable. He moved to Perry, continuing to be independent. When his life required that he use a wheelchair, he was very often “tooling” around Perry. Of course he loved good weather that allowed him to get out easier. Kevin attended St. Brigid Catholic Church in Grand Junction for many years before transferring his membership to St. Patrick Catholic Church in Perry. Kevin had been a member of the Moose Lodge in Perry when it was active and worked in their restaurant. He enjoyed old shows on TV and looked forward to Friday nights spent with his best friend Bud Matthews. Life was getting more difficult for Kevin and he experienced many surgeries, procedures, and hospital stays to recuperate. …but he was always anxious to return to his home. And at this time, he could not return home and it seemed he surrendered to rejoin his parents and his brother Brian in Heaven. His loving family will miss him greatly as will his many friends. Kevin’s sisters knew how much he loved them and are grateful they could be close to him through the years. He is survived by his four sisters, Kathy Alex (Steve) of Ottumwa; Becky Kinney (Doug) of Waukee; Deb Miller (Mark) of Perry and Denise Elston (Roy Sellers) of Moultrie, GA; many aunts and uncles, many nieces and nephews; great nieces and nephews; cousins; other relatives and many friends. Memorials in Kevin’s name may be sent to Hastings Funeral Home Box 204 in Perry.

The family of Kevin Joseph Grow created this Life Tributes page to make it easy to share your memories.