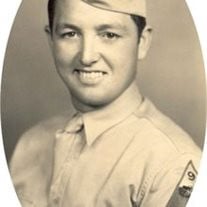 Kenneth was born May 13, 1918 at West Bend, Iowa to Harry Warford Cunningham and Neva Frances Munson Cunningham, and died Wednesday at the Dallas County Hospital in Perry, at the age of 89 years 7 months and 6 days; He attended schools in the Perry area and graduated from Greeley High School, Greeley, Iowa. He served with the Army in the Calvary, graduating from Ferrier School one day before Pearl Harbor. Kenneth was dispatched immediately to patrol the borders and later saw action in various places including the Battle of the Bulge. He was honorably discharged in August of 1945. Kenneth married Mary Josephine Ethell on November 29, 1947; he ran the Standard Tank Wagon Service for several years and on September 6, 1957 became Post Master in Rippey. Kenneth retired in 1990. They just celebrated 60 years of marriage. Kenneth and Mary were proud parents of their two children: David and Kathy. Kenneth's family was of most importance to him. He loved to spend time with his grandchildren and enjoyed giving them rides on the golf cart. Kenneth always found joy in his horses and being "gramps" to many children. He was a member of the VFW, Past Commander of the Kinkead-Martin American Legion Post in Rippey; and Past President of the Rippey Lions. Kenneth is survived by his wife Mary; son, David Cunningham (Sandra); daughter, Kathy Brant (Kirk), all of Rippey; four grandchildren, Joell Herrick and husband Buddy of Waukee, Jamie Brant and wife Cathy of Perry, Danny Cunningham and wife Gina of Perry, and Jennifer Eiteman and husband Tim of Perry; eight great-grandchildren, Sydney and Halle Herrick, Cole and Race Brant, Skylar and Eliza Cunningham, and Dylan and Delaney Eiteman. He is also survived by a nephew Harry Trevarthen of Madrid and niece Tanna Corrigan (Tom) of Dawson. He was preceded in death by his parents, Harry and Neva; sister, Bette Trevarthen, and brother Bill Cunningham

Kenneth was born May 13, 1918 at West Bend, Iowa to Harry Warford Cunningham and Neva Frances Munson Cunningham, and died Wednesday at the Dallas County Hospital in Perry, at the age of 89 years 7 months and 6 days; He attended schools in the... View Obituary & Service Information

The family of Kenneth D. Cunningham created this Life Tributes page to make it easy to share your memories.

Send flowers to the Cunningham family.