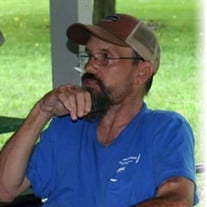 Hastings Funeral Home in Perry is in charge of arrangements for Keith A. Knoll, 53, of Perry. Keith died Friday, October 22, 202 at Iowa Methodist Hospital Unity Point. Visitation services will be held from 1:00 p.m. Friday, October 29, 2021 until 7:00 p.m. at Hastings Funeral Home in Perry. Family will greet friends from 4:00 p.m. until 7:00 p.m. Keith Allen Knoll, son of Ernest Irving Knoll and Rita M. Palmer Knoll, was born November 14, 1967 in Perry, Iowa. Keith worked at Hardees during his school years. He graduated from Perry High School in 1986, then went on to college to be a computer technician. Keith was well known and liked by all the people he socialized with in this small town of Perry. He enjoyed taking his nephews fishing and going to watch them in all their school activities. Keith worked at the Bar-B truck stop as a dishwasher for a short time. He was a programmer at Perry Pegasus Channel 12 TV and was a member of the Perry Elks Lodge. In his free time Keith liked to go to the bars to play pool and unwind from the day. He liked going to the casinos, figure eight races, and watching WWE wrestling and RAW. Keith had a heart of gold and nothing meant more to him than his family. He passed away Friday, October 22, 2021 at Iowa Methodist Hospital Unity Point in Des Moines. Keith was preceded in death by his parents Ernest and Rita, grandparents, and uncles Donald Palmer and William Knoll. Keith is survived by his dogs Brittany and Lilly; brother Phillip Knoll (Jean) of Fort Dodge, sisters: Beverly Hegstrom (Brent) of Dawson, Connie Smothers (Terry Liggett) and Annette Knoll both of Perry, uncle Gerald Palmer (Arlene) of Perry, nieces and nephews: Bryan Hegstrom, Cristina Hegstrom (Andrew Williams), Jason Smothers (Andria), Cory Knoll (Evelyn), Forrest Knoll (Ann), Zacharey Smothers (Samantha), Karrie Smothers, and Schyler Knoll; great nieces and nephews: Brooklyn Williams, Emily Williams, Zayden Smothers, Raquel Smothers, Lexi Smothers, Nason Knoll, River Knoll, Lola Banks, Avigail Harris, Rorey Smothers, and Rainer Knoll; numerous cousins, other relatives and many friends

The family of Keith Allen Knoll created this Life Tributes page to make it easy to share your memories.

Send flowers to the Knoll family.