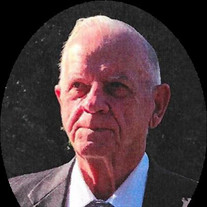 Services for Keith Francis Knight were held 10:00 a.m. Monday, October 7, 2019 at Christ Lutheran Church outside of Bouton, Iowa. Visitation was after 1:00 p.m. Sunday with family present from 5:00 until 7:00 p.m. at Hastings Funeral Home in Perry. Rev. Stephen Ude provided words of comfort. Honorary casket bearers were: Dean Stahl, Ed Knoll and Chris Knoll. Casket bearers were: Nick Gray, Don Motz, Douglas Johnson, Andrew Harris, Bart Harris and Don Chupp. Linda Tingwald was the pianist. Congregational hymns chosen were “Amazing Grace #744” and “Praise God From Whom All Blessing Flow.” Interment took place at Peoples Township Cemetery in Boone County with Military Rites by the United States Army Detail from Camp Dodge, Iowa. Following the service at the cemetery was a luncheon at the church. Keith Francis Knight, son of Francis Erwin Knight and Alberta Mary Stockburger Knight, was born June 30, 1933 on the family farm outside of Woodward, Iowa and died October 2, 2019 at the V.A. Hospital in Des Moines, Iowa at the age of 86. Keith attended Perry Schools where he graduated in 1951. On April 15, 1953 Keith and Juanita Mae Kading were united in marriage at the Trinity Lutheran Church. The couple was blessed with a son Michael and a daughter Susan. Keith was inducted into the United States Army on May 4, 1953 in Des Moines, Iowa and was honorably discharged on April 26, 1955. He lived on the farm his whole life. Keith loved to dance especially polka dancing and was even a member of the Polka Lovers of Iowa. He also enjoyed playing cards and traveling the country. Keith was preceded in death by his parents Francis Knight and Alberta Stockburger Knight Knoll and his wife Juanita in 1998. Keith is survived by his son Michael Knight of Woodward, daughter Susan Wilbur and her husband Tim of Granger, granddaughter Kristie Gray and her husband Nick of Grimes and sister Roberta Mabry, of Rio Rancho, , New Mexico.

Services for Keith Francis Knight were held 10:00 a.m. Monday, October 7, 2019 at Christ Lutheran Church outside of Bouton, Iowa. Visitation was after 1:00 p.m. Sunday with family present from 5:00 until 7:00 p.m. at Hastings Funeral Home in... View Obituary & Service Information

The family of Keith Francis Knight created this Life Tributes page to make it easy to share your memories.

Customized sympathy cards. Mailed for you.