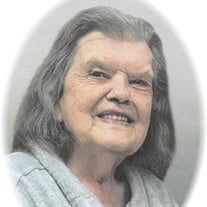 Graveside services for Katie will be Saturday, September 29, 2018 at Violet Hill Cemetery. Family and friends will gather at Hastings Funeral Home in Perry by 12:45 p.m. to process to the cemetery, weather permitting. In case of rain, her services will be held at the funeral home at 1:00 p.m. Saturday. Memorials will be designated to Forest Park Museum – Dallas County Conservation Foundation. Katie died on September 25, 2018 at her home. Katherine Darlene Edmondson, daughter of Elmer A. Roberts and Frances Workman, was born November 5, 1930, in Perry, Iowa and died at her home in Perry September 25, 2018. Katie, as she was lovingly known, grew up in Perry. She graduated Perry High School in 1948 and was the Perry Centennial Queen in 1969. Perhaps that was the beginning of her desire to commit so much of her time and energy to Perry. She lived in Perry most of her life with a few earlier years spent in western Iowa. Her family returned to Perry in the late 1950’s. Katie, as a true Perry supporter, was involved with the history of the area and a true “go-to” person to help others with their quests for information. She was well known for her genealogy skills and interests and was a tireless worker for the preservation of Perry’s history and upkeep. Katie was an avid bowler and a great teacher of the sport. She was left handed but could handily instruct the right handed. Katie worked as a waitress at the Escadrille, worked at McDonald Drug, was active in the Elks Lodge and will be remembered for her friendliness. In 1984 Katie married Jack Edmondson and they lived all of their married lives in Perry. Her biggest love was her family and thoroughly enjoyed her grandchildren. Katie created many crocheted gifts for family and friends. She also kept busy with jig saw puzzles and word search. Katie was preceded in death by her parents, infant sister Doris Ann Roberts, sisters Mary Jane Henry and her husband Bert, Beulah Woody, brothers Milford Roberts, David Roberts and his wife Barb, and brother John Roberts. Katie’s memory will be cherished by her son Alan Hinz and his wife Helen of West Townsend, MA, daughters Frances Morman and her husband Dwayne of Perry, Norma Fulton and her husband Dan of Creston, sister Margaret Smith and her husband Smitty of Lafayette, IN, and sister-in-law Eleanor Roberts of Perry. Katie’s beloved grandchildren ,who fulfilled her wish for a “Pink Cadillac” (albeit a model car), Kristen Whitney and husband Matt, Alison Hinz, Chad Morman and wife Bailey, Eric Morman and wife Ashlee, Heather Hill and husband Jeff, and Toni Fulton, great- grandchildren Ahlina Andrews, April and Bo Morman, Huntter and baby girl Morman, Collin Hill, William and Dallas Sadler, nieces, nephews, other relatives and friends. In keeping with Katie’s love of the Forest Park Museum and the Dallas County Conservation Foundation, her children have designated them to receive her memorials

Graveside services for Katie will be Saturday, September 29, 2018 at Violet Hill Cemetery. Family and friends will gather at Hastings Funeral Home in Perry by 12:45 p.m. to process to the cemetery, weather permitting. In case of rain, her services... View Obituary & Service Information

The family of Katherine Darlene Edmondson created this Life Tributes page to make it easy to share your memories.

Graveside services for Katie will be Saturday, September 29,...