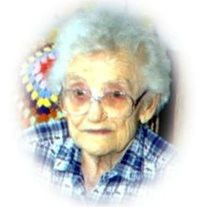 Karolina Stiegelmar Mayer, daughter of Paul Stiegelmar and Juliana Lietzenberger Stiegelmar was born January 15, 1911 in Surtchin, Yugoslavia and died August 16, 2005 at the Dallas County Hospital in Perry, Iowa at the age of 94 years, 7 months and 1 day. Karolina grew up and attended school in Yugoslavia. On February 13, 1929, Karolina was united in marriage to Jakob Mayer. They were the parents of three children: Katharine, Adam and Jakob. Karolina worked in the fields in Yugoslavia until World War II began and she began cooking for the elderly in the camps in Germany. During the war her husband Jakob went missing in 1945, never to be found. In 1945, Karolina moved to the United States to Perry, Iowa. She stayed busy with several cleaning jobs including Perry Federal Land Bank and the Perry Lutheran Home. She then went to be a cook at Copley Hospital in Aurora, Illinois before moving back to Perry to work as a cook at the Perry Manor. She also stayed very busy being a homemaker and taking care of her children. She loved to knit, crochet and embroider. Karolina has made over 2000 dolls. Karolina was preceded in death by her parents, her husband, and her three children: Katharine, Adam and Jakob. She is survived by 10 grandchildren: Josefine Vodenik and her husband Larry of Perry, Karoline Adams and her husband Bill of Perry, Peter Gelbowitz and his wife Debbie of Perry, Jo Ann Nicolaisen and her husband Jim of Daingerfield, Texas, Richard Gelbowitz and his wife Sarah of Perry, Linda Gelbowitz of Omaha, NE, Susie Tomchick and her husband Rob of Canada, Pauline Osterling and her husband John of Canada, Rose Weiler and her husband Terry of Canada and Kathy Lodin and her husband Curt of Canada; 15 great- grandchildren: Jodi, Josef, Josiah, Jerry, Christy, April, Stephanie, Andrew all of the United States and Joe, Ray, Sophie, John, Anthony, Audrey and Jack all of Canada; 6 great-great grandchildren: Katie, Mercedes, Tyler, Mason, Hudson and Bennett.

The family of Karolina Mayer created this Life Tributes page to make it easy to share your memories.

Send flowers to the Mayer family.