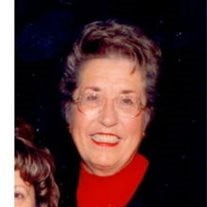 Karen Jean Jones Roberts, daughter of Robert Clare Jones and Orpha Marie Laughman Jones was born November 4, 1942 at 602 S. Second Street in Perry, Iowa and died March 14, 2009 at the Greene County Medical Center in Jefferson, Iowa, at the age of 66 years, 4 months, and 10 days. Karen grew up in Perry, attending Lincoln Elementary School and graduating from Perry High School in 1961. She was married to Dale L. (Tuffy) Roberts on October 27, 1961 at Trinity Lutheran Church in Perry. The couple lived in Perry prior to moving to rural Dawson. Karen worked as a clerk for Iowa Finance during that time. Karen and Tuffy became the parents of a daughter, Denise Marie in 1963. The family lived in Herndon prior to moving south of Jamaica where they resided for over 15 years. During this time they accepted the guardianship of Tuffy's niece, Debra Clouse whom they raised as their own. Karen was a very loving mother and grandmother who enjoyed spending time with her family. Karen worked as a secretary/bookkeeper for several businesses including the Milwaukee Railroad, YJB High School, Pantier Moving & Storage, and Jacobsen Holz Corp. The couple moved to Jefferson in 1994 where Karen worked for Iowa Realty/MacDonald Insurance for ten years prior to retirement. Her hobbies included needlework, sewing, crafts, reading, swimming, and genealogy. She was a member of the Guthrie County, Greene County, and Clay County, IL. Genealogical Societies. She was preceded in death by her parents, her mother-in-law Lula Roberts, sisters-in-law Fern Rittgers, Betty Devilbiss, and Norma Roberts as well as brothers-in-law Don Roberts, George and Clarence Hougham. Karen is survived by her husband Dale (Tuffy) Roberts of Jefferson; daughters Denise Chapman and her husband Dan of Bagley and Deb Thornburg of West Des Moines; four grandchildren, Teresa Chapman of Bagley, Tony Chapman of Bagley, Kim Thornburg of Ankeny and Tanner Thornburg of West Des Moines; sister Judith Kempf and her husband Bill of Dawson; brothers-in-law Roy Roberts and his wife Ginger of Nixa, MO and Jim Hougham and his wife Anna Mae of Herndon. Also surviving are two aunts, June Winchell of Perry and Irene Reed of Boone, cousins, nieces, nephews, other relatives and many friends.

The family of Karen Jean Roberts created this Life Tributes page to make it easy to share your memories.

Send flowers to the Roberts family.