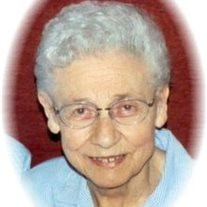 June Maxine Lambert Trevarthen, daughter of Everette Joseph Campbell and Fern Lyons Campbell, was born April 8, 1919 in Hannibal, Missouri and died December 28, 2005 at the Dallas County Hospital in Perry, Iowa at the age of 86 years, 8 months and 20 days. June lived in Missouri and Illinois before making Iowa her home. In September 1937, June was united in marriage to Raymond Joseph Lambert. They were the parents of six children: Helen, Charlotte, Nancy, Paul, Jerry and Barry. The family made their home in Perry. On July 1, 1965, June was united in marriage to Edward Trevarthen. With this union, June gained two step-children: Harry and Tanna. June volunteered many, many hours as a Dallas County Hospital Auxiliary Member. She loved to read, crochet and play the piano. Her greatest joy in life was her family. June was preceded in death by her parents, her husband Raymond, her husband Edward, her daughter Helen Conklin and son-in-law Ronald Conklin, her brother Charles Campbell, and her grandson Doug Conklin. She is survived by her daughters: Charlotte Peterson and Nancy (Jim) Collins both of Perry; her sons: Paul (Edith) Lambert of Moody, Texas, Jerry (Trudy) Lambert of Perry and Barry (Kathy) Lambert of Woodward; step-son: Harry Trevarthen of Boone; step-daughter: Tanna (Tom) Corrigan of Dawson; many grandchildren, other relatives and friends.

The family of June Lambert Trevarthen created this Life Tributes page to make it easy to share your memories.

Send flowers to the Trevarthen family.