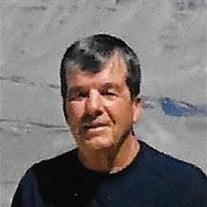 Hastings Funeral Home in Perry is in charge of arrangements for Jonathan Lee Smith “Jon”, 76, of Perry. Jon died January 10, 2020 at his home. A Memorial luncheon will be held from 1:00 until 5:00 p.m. Saturday, January 18, 2020 at the Waveland Golf Course in Des Moines, Iowa. Jonathan Lee Smith “Jon”, son of Raymond Leon Smith and Virginia Louise Williams Smith, was born July 16, 1943 in Ottumwa, Iowa and died Friday January 10, 2020 at his home in Perry. Jon grew up in West Des Moines and graduated from Valley High School in 1961. Right after high school Jon enlisted in the United States Navy Marine Corps and worked in the Navy Hospital. On December 19, 1987 Jon and Theresa Dale Robinson were united in marriage in West Des Moines. They lived in Windsor Heights for a few years, then moved to Perry where they have lived for the past 23 years. Jon was one of the nicest and sweetest guys you would ever meet. He would write Terry a poem every holiday inside of a card. He was a great father and even greater Papa! Jon loved being outdoors. He would whistle to the birds every morning. Jon loved watching sports especially football and golf. He enjoyed going fishing, golfing and four wheeling, but most of all he loved spending time with his family. Every Thursday Jon and the Valley Boys would meet for their ritual lunch. They never missed it even when Jon got too ill to go the guys came to where Jon was. Jon worked as a carpet estimator and even had his own business in 1988 called Smittys. He was the best role model anyone could ask for. Jon was preceded in death by his parents Ray and Gina Smith and son Michael Cechovic. Jon will always be in the hearts of those left to cherish his memory. His wife of 32 years Terry Smith of Perry; sons Donnie Smith of Iowa and Jeff Cechovic (Danielle) of Perry; daughter Suellen Acri of Van Meter; daughter-in-law Holly Cechovic of St. Joseph, MO; ten grandchildren: Casey, Mackenzie, Olivia, Ben, Riley, Easton, Charlie, Remy, Rebel and Caiden; sisters Margaret Law of Clive and Jean Gibbs of Waukee; mother-in-law Barbara Robinson; brothers-in-law Mike Griffin (Karen) and Ed Robinson (Brenda); sister-in-law Cindi Shepard (Kellie) all of Indiana; nieces, nephews, other relatives and many friends.

The family of Jonathan Lee Smith "Jon" created this Life Tributes page to make it easy to share your memories.