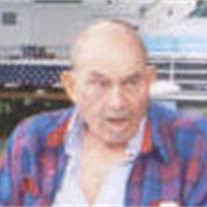 John Kenneth Frantum, son of George Washington Frantum and Dora V. Frantum, was born April 27, 1916 in Minburn, Iowa and died April 4, 2005 at the Perry Health Care Center in Perry, Iowa at the age of 88 years, 11 months and 7 days. John grew up in the Minburn area and attended the Minburn Schools. On June 26, 1936, John was united in marriage to Helen Ruth Robbins. They became the parents of one son, Jack. John did custom farming for a time before the couple became owner/operators of a 24 hour truck stop located on highway 169. In the spring of 1949, the family moved to Perry and John began to work in the contracting business. In 1952, John started his own contracting business Jack Frantum Roofing and Insulation. He ran his business until retiring in 1980. John was a lifetime member of the Moose and Odd Fellows. He loved to fish, watch stock car races, and go camping. John was preceded in death by his parents; his wife Helen; sister: Grace; and 2 brothers: Walt and Lloyd. He is survived by his son Jack Frantum and his wife Edith of Perry, Iowa; 6 grandchildren: Kevin Frantum and his wife Julie of Marrietta, California, Kellee Jaundra and her husband Larry of Omaha, Nebraska, Jennifer Almoto and her husband Sonny of Omaha, Nebraska, Dawn Harl and her husband Darin of Perry, Iowa, Preston Costin and his wife Barb of Perry, Iowa, and Steven Johnsrud and his wife Michelle of Apple Valley, Minnesota; 16 great-grandchildren; nieces, nephews, other relative and friends.

The family of John Frantum created this Life Tributes page to make it easy to share your memories.

Send flowers to the Frantum family.