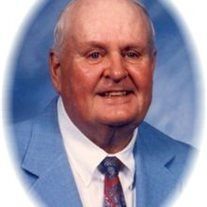 John Edmund DeLay, son of Raymond Washington DeLay and Mildred Etta Compton DeLay, was born August 18, 1930 in Creston, Iowa and died January 25, 2006 at Mercy Hospice in Johnston, Iowa at the age of 75 years, 5 months and 7 days. Jack, as he was well known, grew up in southern Iowa, attending rural schools and graduated from Waukee High School in 1948. Jack helped on his father's farm until entering the Army and serving his county during the Korean Conflict. He was stationed at Ft. Sill. On June 3, 1953, Jack was united in marriage to Barbara Jean Ellerman. They were the parents of 2 children: Ron and Becky. They farmed near Dallas Center, moving to their present farm near Minburn in March of 1958. He loved farming and attending cattle auctions. Jack worked with the Dallas County Extension Service and the Minburn Vocational Agriculture Program. He was a board member of the Minburn Telephone Company and was active in the Perry Rotary Club. He was also a long-time member of the Minburn United Methodist Church. Jack was preceded in death by his parents, his brother Robert, niece Lori DeLay, and brother-in-law Bob Rockey. He is survived by his wife: Barbara of Bouton; son: Ron DeLay and his wife Jane of Indianapolis, Indiana; daughter: Becky DeLay of Sewickley, Pennsylvania; grandchildren: Joshua DeLay of Oxford, Mississippi and Benjamin DeLay and his wife Teresa of Anthem, Arizona; great-grandchildren: Bradley and Samuel DeLay; brothers: Jerry DeLay and his wife Nancy of Indianola and Roger DeLay and his wife Karen of Ringoes, New Jersey; sisters: Barbara Mc Cormick and her husband Leland of Iowa City, Shirley Baird of Sunnyvale, California and Janice Spellman and her husband Jerry of Granger; sister-in-law: Sue DeLay of Aiken, South Carolina; brother-in-law: Dick Ellerman and his wife Doris of Dallas Center; many nieces and nephews, other relatives and a host of friends.

The family of John E. Delay created this Life Tributes page to make it easy to share your memories.

Send flowers to the Delay family.