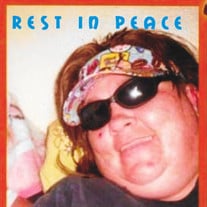 Joanne Joyce Reis, daughter of Pius Peter Reis and Charlotte Loretta Maly Reis, was born February 14, 1964 in Dickinson, North Dakota and died July 2, 2021 at Unity Point Methodist Hospital in Des Moines, Iowa. Joyce grew up in North Dakota and Colorado. After high school, years after moving to Des Moines she went to DMACC and got her Associates degree in Computer Science. Joyce enjoyed being around others and had several jobs in the food service industry. She loved cooking and most of all being with her son Dustin and the rest of her family. One of her proudest moments was when she got to see her son graduate from DMACC and always wanted to see him graduate from Iowa State University. Joyce was a member of the St Patrick Catholic Church in Perry. She was preceded in death by her parents Pius and Charlotte, her brother Paul Reis and her sister Barbara Reis. Joyce is survived by her son Dustin Reis of Ames; her brothers: Mike Reis (Brenda) of Hartley, Ted Reis (Michelle) of Cherokee, Jim Reis of Correctionville, David Reis (Denise) of Lawton, Tim Reis (Christal) of Kingsley, and Tom Reis (Vicky) of Topeka, Kansas; her sisters: Mary Malard (Lee) of North Dakota, Betty Riddle of Onawa, Kathy Zimmer of Marcus, and Margie Mesler of Cherokee; her sister-in-law Lori Reis of North Dakota; nieces, nephews, other relatives and many friends. Funeral Services for Joanne JOYCE Reis were held 10:00 a.m. Saturday, July 10, 2021 at Hastings Funeral Home in Perry. Visitation was held one hour prior to the service. Father Luis Mejia of the St Patrick’s Catholic Church in Perry provided words of comfort. Joyce’s son Dustin Reis played “Oh Danny Boy” on the piano. Recorded songs were: “Because He Lives,” “Psalm 27,” and “Woman Sensuous Woman” By: Mark Chestnut. Hastings Funeral Home 1417 2nd St. Perry, Iowa 50220 403 North Elm Jefferson, Iowa 50129 [email protected] [email protected] 515 465-4691 www.hastingsfuneralhomes.com 515 386-8181

The family of Joanne JOYCE Reis created this Life Tributes page to make it easy to share your memories.

Send flowers to the Reis family.