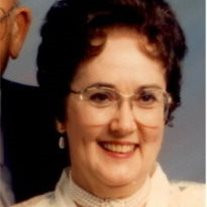 Joan Ilene Allen, daughter of Wilbur and Irene "Tillie" Littell Collins, was born July 1, 1934 at the Greene County Hospital in Jefferson, Iowa, and died January 13, 2009 at the Evangelical Free Church Home in Boone, Iowa at the age of 74 years, 6 months and 12 days. Through the years, some would call Joan, Jo Ann. Her parents farmed south of Scranton before purchasing a farm south of Churdan where she began her schooling. Joan graduated from Churdan High School in 1953 and then attended Buena Vista College where she was a member of the Delta Phi Beta Sorority and the A cappella Choir that went on many singing tours. She later worked at the Jefferson State Bank. On December 19, 1954, she married John H. Allen at the First Presbyterian Church in Jefferson, Iowa and they were parents of two sons, David and Rick. Joan and John farmed near Panora for one year and in 1958 moved to a farm near Churdan which they later purchased. After John's death on December 30, 2005, Joan continued to make her home on the farm she loved, totaling 50 years. Following the closing of the Churdan Presbyterian Church, she became a member of the Churdan Methodist Church for 38 years, where she was a member of the United Methodist Women and Nightingale Circle. She enjoyed teaching Bible School and Sunday School for many years. Joan was honored with a pin "True of Life" badge by the World Federation of Methodist Women. In 1999 she became a member of the Jefferson Presbyterian Church. She served as President of the Churdan Alumni Association for two years and served on several committees of the Alumni Association. Joan had been a girls 4-H leader and received honorable recognition for her outstanding leadership during those years. Her favorite pastimes were sewing, baking, and working in her flower gardens. Joan enjoyed watching her grand-children in their sports and activities. Winter trips to Arizona were very memorable for her. Joan was preceded in death by her parents, Wilbur and Tillie Collins; and husband John. She is survived by her sons: David and wife Mary Jo of Scranton, Iowa; Rick and wife Lori of Louisville, Colorado; 5 grandchildren: Bob Allen and wife Bridgett of Ogden, Iowa; Julie Sander and husband Jeff of �����Ames, Iowa; Jon Allen and friend Shawn Brown of Rippey, Iowa, Joshua Allen and Jeremiah Allen, all of Louisville, Colorado; 3 great-grandchildren: Elizabeth Elaine; Cody John; and Paisley Jo Allen of Ogden, Iowa; and much anticipated Baby Sander, due to arrive any day. Joan is also survived by her brother Dr. James Collins and wife Linda of Ankeny, Iowa; and sister Jean Naylor and husband Dee of Scranton, Iowa; sisters-in-law: Joy Allen of Jamaica, Iowa; and Marion Joan Allen of Panora, Iowa; and brother-in-law Jacke Farrell of Des Moines, Iowa; nieces, nephews, other relatives and many friends HastingsFuneral Home www.hastingsfh.com [email protected] 403 North Elm Box 253 515 386 8181 ~ Jefferson, Iowa 50129 .

Joan Ilene Allen, daughter of Wilbur and Irene "Tillie" Littell Collins, was born July 1, 1934 at the Greene County Hospital in Jefferson, Iowa, and died January 13, 2009 at the Evangelical Free Church Home in Boone, Iowa at the age of 74 years,... View Obituary & Service Information

The family of Joan I. Allen created this Life Tributes page to make it easy to share your memories.

Send flowers to the Allen family.