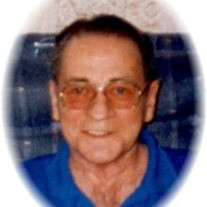 Gerald "Jerry" Deloss Howard, son of Gerald Anson Howard and Matilda Magdaleen Birch Howard, was born April 14, 1932 in Perry, Iowa and died March 21, 2006 at his home in Perry, Iowa at the age of 73 years, 11 months and 23 days. Jerry, as he was well known grew up in Perry and attended St. Pat's and Perry schools. On May 9, 1964 Jerry was united in marriage to Betty "Bev" Lou Gallagher. They were the proud parents of 6 children: Julie, Linda, Verneta, Larry, Baby Howard and Jerry. They made their home in Perry for a short time before moving to Des Moines. In 1975, the family moved back to Perry and has lived here ever since. Jerry stayed busy working for Firestone for over 34 years before taking early retirement in 1986. Jerry loved to play cards, especially cribbage and pitch. He could also often be found woodworking, often making clocks or repairing them. He also liked his county music and had many jokes to tell. Every year Jerry planted hot pepper plants in his garden, or at least watched his kids plant them for him. He was a proud member of the Union, as well as the Moose Lodge, Elks Lodge and the V.F.W. in Madrid. He was also a lifetime member of the Hunt and Fish Club in Frazier, Iowa. Jerry was preceded in death by his parents and 2 sons: Larry and Baby Howard. He is survived by his wife Bev Howard of Perry; his son: Jerry D. Howard and his wife Patty of Monticello, Minnesota; 3 daughters: Julie Smith and her husband Kenneth of Colorado Springs, Colorado, Linda Morford and her husband Tom of Colorado Springs, Colorado and Verneta Annear and her husband Bill of Perry, Iowa;11 grandchildren: Matthew Howard, Daniel Annear, Nathan Smith, Meagan Howard, Misty Annear, Amanda Miller, Michelle Hoffman, Carrie Hamrick, Aubury Miller, Jennifer Brickell and Jessica Sanchez; 15 great-grandchildren; 3 sisters: Janice Finley of Tera Haute, Indiana, Maimie of Des Moines and Brab of Des Moines; 1 brother: Richard Howard and his wife Cheryl of Hollandale, Minnesota; nieces, nephews other relatives and friends.

Gerald "Jerry" Deloss Howard, son of Gerald Anson Howard and Matilda Magdaleen Birch Howard, was born April 14, 1932 in Perry, Iowa and died March 21, 2006 at his home in Perry, Iowa at the age of 73 years, 11 months and 23 days. Jerry, as... View Obituary & Service Information

The family of Jerry Howard created this Life Tributes page to make it easy to share your memories.

Send flowers to the Howard family.