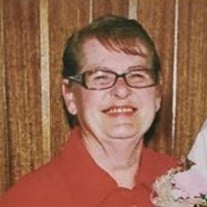 Graveside Services for Janet Marie Gliem were held 10:00 a.m. Wednesday, March 17, 2021 at Violet Hill Cemetery in Perry.Mr. Tom Stone provided words of comfort. Honorary casket bearers were: Bradley, Erica, David, Samantha, Hannah, Brianna, Joseph, Jenna, Alyce, Greyson, Lily, Liam, & Elias. Janet Marie Gliem, daughter of Ralph Graves and Ethel Brombauh Graves, was born June 6, 1942 in Farmington, Iowa and died March 3, 2021 in Churdan, Iowa. Janet was married to Gerald “Jerry” Gliem on May 29, 1960. The couple moved to Perry in 1964. They had three children together: Sandra, Richard, and Debra. Janet worked at Woodward State Hospital for 27 years before retiring in 2004. After her retirement she spent many summers in Minnesota with family and friends. She enjoyed fishing and playing cards with her friends sitting around the fire. When she was home, she enjoyed crocheting baby blankets and afghans that she gave to family and friends. She liked to plant flowers but always commented on why the weeds grew faster than the flowers. Going out for lunch with her friends to catch up on what was happening in their lives was always a source of enjoyment to her. She spoiled her dog Mindy and taught her to high five when she wanted something. Janet was known for her independence and strong will if it was something she believed in. She leaves us with many lessons learned and many funny memories that we will hold dear to our hearts. Janet was preceded in death by her husband of 55 years Jerry, daughter Sandra “Sandy” Gliem, sister Sharon, parents, grandparents, aunts, uncles, and cousins. She is survived by her son Richard Gliem (Vicky) of Jefferson; daughter Debra Betz (Alan) of Churdan; sister Judy Stiles of Madrid; sister-in-law Susan Stone (Tom) of Perry; brother-in-law Joe Gliem (Nancy) of Jefferson; five grandchildren: Bradley, Erica, David, Samantha, and Hannah; seven great-grandchildren: Brianna, Joseph, Jenna, Alyce, Greyson, Lily and Liam; and a great-great-grandson Elias; nieces, nephews, other relatives and many friends. DIRECTIONS TO WATCH LIVE STREAM 1. Go to your web browser and type in www.facebook.com/hastingsfuneral 2. Or type in Hastings Funeral Home Perry, Iowa 3. Click on our funeral home website 4. Click on the blue bar that says WATCH VIDEO It should say LIVE in red up in the left hand corner of the video

The family of Janet Marie Gliem created this Life Tributes page to make it easy to share your memories.

Send flowers to the Gliem family.