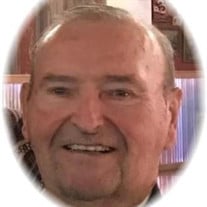 A Graveside Service for James Edward Hogge “Jim” was held 9:00 a.m. Monday, July 13, 2020 at the Richland Township Cemetery in Guthrie County, Iowa. Words of comfort were provided by Pastor Larry Monthei of the Hope United Methodist Parish. Honorary bearers were all of Jim’s friends. Military Honors were provided by U.S. Army National Guard Detail from Camp Dodge, Iowa. Hastings Funeral Home in Perry was in charge of these arrangements. James Edward Hogge was born in Churdan, Iowa, Cedar Township, Greene County, on July 12, 1935 as the sixth child of Edward Samuel and Nellie Opal Mitchell Hogge. The family moved to Jamaica, Iowa in 1939, because Jim’s Dad, Ed Hogge, desired a Consolidated School education for his children versus a rural school. Jim’s earned his High School diploma in the Jamaica High School’s Class of 1952. During his years at home he worked for the railroad, stripped blue grass and helped with the farming. Following graduation in 1952, he remained at home and drove school bus for two years until his enlistment in the Army in November, 1955. He was stationed at Camp Chaffee, Arkansas and Ft. Riley, Kansas, before being sent to Bad Kreuznach, Germany for one year. He separated from the Army at Ft. Sheridan, Illinois, in November 1957. After his discharge, he returned to Jamaica. He worked as a mechanic for Fox Repair Service. He met Nona LaVonne Wasson, and they were married December 28, 1958. To this Union, two children were born: Susan in 1959 and Tony in 1961. In 1962, Jim began working in Perry for Haws Implement Co. as mechanic and later as shop foreman. In 1978, when Haws was sold the business to Van Wall, Jim became Parts Manager. In 1970, Jim and Nona entered the business world in Jamaica, in partnership with Larry and Janet Correy, they purchased the grocery store from Bruce and Mildred Town” where Jim was the meat cutter at the C&H Food Market. Jim earned his private pilot’s license in 1970 and his commercial in 1975. He served as Jamaica Mayor and on the Jamaica City Council, Volunteer Fire Department, was a member of The Union Church of Jamaica’s Church Board and the County Extension Council. As a Jamaica Lions Club member, he was on the Board of Director’s for the club project of building the first Senior Citizens home in Jamaica. Jim also was a member of the planning committee for the 1982 Jamaica Centennial. Widowed in 1999, Jim found love a second time and married Marie E. Hass Marshall Mohr on May 25th, 2005. They shared similar interests in antique tractors, albeit different colors… He: John Deere green and She: Minneapolis Prairie Gold. They travelled widely and were “snowbirds” in Arizona and Texas for twelve years. Together, they served the Jamaica community on the Library Board, Genealogy Society and the Jamaica 125th Anniversary celebration in 2007. Jim is preceded in death by his parents (Ed and Nellie Hogge), wife (Nona), brothers Albert (infant), Dale and Boyd, sisters Dorothy and Alice, sister-in-law Elaine Wasson Willey, brothers-in-law: Russell Crouch, Lou Fairchild, Fred Brattmiller and Larry Willey. Left to cherish Jim’s memory are his wife Marie; children Susan Hogge and Tony Hogge, step-children Vicki Leinen, Eugene (Karen) Mohr), Martin (Betty) Mohr, and Gaylen (Lynette) Mohr, siblings: Marjorie (Ray) Anderson, Roy (Sandra) Hogge, and Marcella Fairchild, step- grandchildren: Isaac and Claire Leinen, Justin (Sara) Mohr, Ryan Mohr, Lindsey Mohr, Kristy (Nick) Willenborg, Michael Mohr and Mallory Mohr; step-great-grandchildren Michelle Mohr, Blake Grothe, and Macy Willenborg; sister-in-law Norma Hogge; step brother-in-law Dan (Joan) McKinney, numerous Nieces, Nephews, Cousins, and many friends. Memorials will be given to the Jamaica Alumni Bell Fund.

The family of James Edward Hogge "Jim" created this Life Tributes page to make it easy to share your memories.

A Graveside Service for James Edward Hogge “Jim” was held 9:00...

Send flowers to the Hogge family.