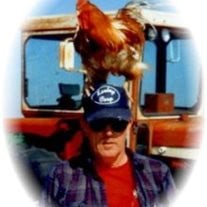 James Fred "Jim" Godfrey, son of Peter Godfrey and Mabel Remele Godfrey, was born September 27, 1934 in Jamaica, Iowa and died February 24, 2006 in Des Moines, Iowa at the age of 71 years, 4 months and 27 days. Jim was born and raised in the Jamaica community, attending school there. He was a heavy equipment operator. He worked on many pipelines, built terraces and many ponds. He served two years in the United States Army as a civil engineer. Jim was awarded the Good Conduct Medal. Jim had quite a sense of humor. He was a free spirit and enjoyed traveling to visit his sister, children and many friends throughout the state and country. He was a gifted musician and taught himself how to play many instruments. He enjoyed sharing his musical talents, singing songs on his guitar and harmonica, banjo, mandolin and sometimes piano, ukulele and violin, and who knows what else. He traveled to visit and play for many friends, nursing homes, and hospitals. He didn't know a stranger because they soon became his friend. He seemed to know when to be there when they needed encouragement the most. All were happy when he dropped in and sad when he left. He was a very unique individual and was always tackling projects, some would say were impossible. He had a strong religious faith and would tell us all to "Trust Jesus". He enjoyed his music and spending time outdoors on his farm, and the pond he built with his Army buddy Jon Buckwalter and other friends. He loved his family. He was proud of his children and grandchildren. He enjoyed watching his grandchildren grow and was thankful to be able to spend time with the youngest, two special little boys, Tanner and Gavin, who lived closed by. He had many special friends throughout his life in Jamaica and around the country, and very special friend of the family, Lyn Bailey. He filled our hearts with many songs and stories. He made us laugh and cry. He had a special gift with children. He seemed to always have harmonicas or Tootsie Rolls to pass out. He is survived by one sister, Phyllis Gaunt of Cabot, Arkansas; his four children: Calvin Godfrey of Santa Barbara, California; Carla Hilgenberg and her husband Keith of Camanche; Carol Godfrey of Ankeny and Marty Godfrey and his wife Kathy of Jamaica; his grandchildren: J.C. and Kaylee Hilgenberg of Camanche and Tanner and Gavin Godfrey of Jamaica; other relatives and many special friends and acquaintenances. He was preceded in death by his parents, Peter and Mabel Godfrey and his step-father August Meinecke.

James Fred "Jim" Godfrey, son of Peter Godfrey and Mabel Remele Godfrey, was born September 27, 1934 in Jamaica, Iowa and died February 24, 2006 in Des Moines, Iowa at the age of 71 years, 4 months and 27 days. Jim was born and raised in... View Obituary & Service Information

The family of James F. Godfrey created this Life Tributes page to make it easy to share your memories.

Send flowers to the Godfrey family.