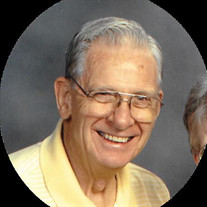 Jack Monroe Pinckert, son of Clifton Pinckert and Alta Eskridge Pinckert, was born October 12, 1931, in South Bend, Indiana. Jack died December 17, 2018 at Iowa Methodist Medical Center in Des Moines, Iowa at the age of 87years 2 months, 5 days. Jack’s funeral was held at 11:00 a.m. Thursday, December 27, 2018 at the First Presbyterian Church, in Jefferson, Iowa. His pastor Rev. Gordon Moen, officiated. The casket bearers were Greg Pierce, Lindsay Bledsoe, Matt Bledsoe, Wayne Lautner, Matt Pittman and Bill Monroe. Sheryl Sloan was the organist and played His Eye is on the Sparrow and Blessed be the Tie that Binds, Wayne Lautner played a song on the trumpet. Military Honors by the Camp Dodge U.S. Army Detail, American Legion Post # 11 and Veterans of Foreign Wars Post # 9599 at the Jefferson Cemetery. Jack grew up with his brother Orval and sister Eleanor. He graduated high school in South Bend, Indiana in 1949. Jack worked for the Studebaker Company and attended Ball State University in Muncie Indiana before being drafted into the U.S. Army where he served from 1952 to 1954. He proudly served with the 45th Division Artillery and for two years was stationed in Korea. Jack was united in marriage with MyraJane Marie Lea and over the course of the next seven years was blessed with four sons, Rick, Gary, Brian, and Ken. Jack was a very intelligent man who had a deep thirst for knowledge. His life was centered on his family and his pursuit of higher education, and with challenging, important professional employment. Jack also made time to serve his church and communities. Jack also received higher education from Purdue University, Indiana University and Notre Dame. After his discharge, the couple lived in South Bend, Indiana where he worked as a draftsman/engineer for Torrington Bearing Company. In 1968 the family moved to Jackson, Mississippi where he accepted the position of Plant Manager with Magna American Corporation. Jack’s family then settled in West Branch, Iowa in 1972 where he would work over the next 12 years as Chief Industrial Engineer for Sheller Globe and then for Century Engineering in Cedar Rapids as an Industrial Engineer. For ten years he served on the West Branch Community School Board. In 1984 Jack and MyraJane moved to Jefferson where he worked as an Industrial Engineer for the Jefferson Transmission Plant. Following that he owned and operated Hydraulic Fabricators. Jack semi-retired and worked part time in the office at Durlam Electric. Jack and MyraJane served on the Board of Directors for Meals on Wheels for 20 years. They were faithful and active members of The First Presbyterian Church. Jack was preceded in death by his parents and brother Orval Pinckert. His memory will be cherished by his loving wife of 66 years, Myrajane; devoted sons Rick and his wife Suzi of Golden, Colorado; Gary and his wife Becky of Palmer, Alaska; Brian and his wife Linda of Oviedo, Florida; and Ken and his wife Mary of Everett, Washington; six grandchildren, 8 great - grandchildren; sister Eleanor Stock of South Bend, Indiana; sisters – in - law Carol Pinckert, Melinda Booth - Lea and Elena Lea; nieces; nephews; other relatives and many friends. A lunch was held at the church before going to the cemetery. Memorials in Jack name may be sent to Hastings Funeral Home Box 204 Perry, Iowa 50220

The family of Jack Monroe Pinckert created this Life Tributes page to make it easy to share your memories.

Send flowers to the Pinckert family.