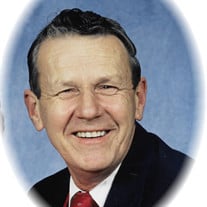 Hastings Funeral Home in Perry is in charge of services for Hubert Eugene McClintick, 81. Mr. McClintick died at his home in Perry Sunday morning, June 8, 2018. Hubert Eugene McClintick, son of Hubert John McClintick and Hazel Clarice (Anderson) McClintick was born June 4, 1937 in Greene County, Iowa and died July 8, 2018 at his home in Perry, under Hospice care at the age of 81 years, 1 month, 4 days Funeral services were held at 10:00 a.m., Thursday July 12, 2018 at Hastings Funeral Home, Perry, Iowa with Pastor Josh McFarland, of Bethel Church, Ogden, Iowa, officiating. Hubert’s casket bearers were Justin Tyssling, Jon Quast, Jerry Anderson, Jon Jamison, Larry Meacham and Tucker Rotert. Music was Peace In The Valley, Amazing Grace and You Raise Me Up. The burial was at Violet Hill Cemetery, Perry, Iowa, with Military Rites, U.S. Army Honors, Camp Dodge, Johnston, Iowa. Hubert grew up in the Grand Junction area and graduated Grand Junction High School in 1955. Hubert entered the U.S. Army in February of 1960 and after active duty, served in the Reserves until 1966. He enjoyed playing the trumpet during his school years and took his talent on to play with the “Rhythm Aces”. It was during that time he met Nancy Jean Louk whose family was a part of the band. They married April 7, 1961 in a ceremony at the Central Christian Church in Jefferson. Hubert and Nancy were blessed with three children, Tammy, Nichole, and Mark. The family lived in Jefferson for nine years where Hubert was employed by the Bee and Herald Newspapers as a print specialist. In 1972 they moved to Perry where they enjoyed living on an acreage, complete with horses. In 1982 they moved into their home on Otley Street. Hubert was employed with Idea Press and later became co-owner until he retired in 1995. He was a successful businessman with his kind, friendly personality and smiling face. The Perry Elks Lodge was near and dear to him. He was always willing to hold office and with Nancy’s support, served as Exalted Ruler. He was honored as Elk of the Year. Just recently Hubert was presented with Lifetime Membership in the Lodge. In addition to his great love of the Elks and selfless participation to make the Lodge successful, he was a former Mason, Past President of Kiwanis, member of the Perry Golf and Country Club, and a league bowler. Hubert and Nancy enjoyed bowling together, camping with their family and they always loved to dance. Hubert was preceded in death by his parents, wife Nancy, daughter Tammy Renee, parents-in-law Keith and Jeanne Louk and brother-in-law Dean Louk. His memory will be cherished by his daughter Nichole Brown of Jefferson; his son Mark McClintick (Tammy Jo) of Bloomfield, Nebraska, grandchildren Dakota Tysseling (Justin), Shannon Brown, Carly Brown, Bailey Brown, Ashley Mayer, Ryan McClintick (Lisa), Megan Anderson (Chase), Josie McClintick, Mason McClintick, Diane McClintick, several great-grandchildren, sister-in-law Jeannine Louk of Webster City, nieces, nephews, other relatives and many friends. Memorials in his name may be left at the funeral home for his family’s later designation. [email protected] hastingsfuneralplan2 [email protected]

The family of Hubert Eugene McClintick created this Life Tributes page to make it easy to share your memories.

Hastings Funeral Home in Perry is in charge of services for Hubert...

Send flowers to the McClintick family.