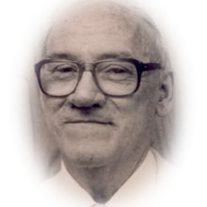 Harold Dean Bailey, son of Bert Henry Bailey and Pearl Frances Millard Bailey, was born June 4, 1924 in Minburn, Iowa and died September 19, 2005 at the Perry Lutheran Home in Perry, Iowa at the age of 81 years, 3 months and 15 days. Harold moved to Perry with his family in 1929, attended school there and graduated with the class of 1943. Harold had a love for journalism and he began working on the Telital Newspaper while in high school, which was the school's news publication. After high school, Harold was the sports editor for The Guthrie Center Times for 2 � years in addition to his sports editor position at The Perry Chief. Harold remained writing for the Perry Chief for his entire career, retiring as Sports Editor in 2002, but remaining on the Chief's staff until fully retiring in 2005. Throughout this long career, Harold received many awards for journalism, including the Iowa Football Coaches Association Media Man of the Year, the Distinguished Service Award from the Iowa Newspaper Association and the Iowa High School Athletic Association Media Service Award. He was inducted into the Perry Sports Hall of Fame on March 27, 1979 by the Perry Athletic Booster Club. He provided the Chief's readers with coverage of all athletic events including the undefeated football team's 1980 season, the boys' state basketball championship team of 1988, the girls' state basketball tournament appearances, as well countless sports successes of his hometown teams. Harold loved miniature cars and had acquired a large collection. He was a member of the Antique Collectible Car Society, the Three Quarters Century Club and the Perry Rotary Club. Though he never was called to serve in active duty, Harold was a member of the United States Naval Reserve. Harold also was especially fond of children and animals. Harold was preceded in death by his parents, his sisters: Velma Swihart, Thelma Berger, Edna Kanealy, and Gertrude Schirman; and his brothers: Fred Bailey, Leon Bailey, Virgil Bailey, Kenneth Bailey and Bert, Jr. "Jimmy". He is survived by his sisters: Blanche Miner of Perry and Ruth Bailey of Kernersville, North Carolina; sister-in-law: Velma Bailey of Bouton; numerous nieces and nephews and a host of friends.

The family of Harold D. Bailey created this Life Tributes page to make it easy to share your memories.

Send flowers to the Bailey family.