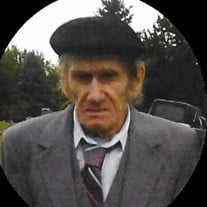 Services for Gordon Bernard Jones “Gordy” were held 11:00 a.m. Monday, November 18, 2019 at Hastings Funeral Home in Perry. Visitation started at 9:00 a.m. until the time of service. Chaplain Terry Wilkinson provided words of comfort. Brayden Kempf-Jones and Tucker Kempf-Jones were the honorary bearers. Casket bearers were Tony Jones, Kenny Jones, Cole Jones and Randy Schuhardt. Recorded music selected was: Drink A Beer, Grandpa and Whiskey River. Interment took place at Prairie Center Cemetery in Rural Linden, Iowa. Gordon Bernard Jones, son off Orville Bernard Jones and Elva Belle Davis Jones, was born October 14, 1942 on the family farm south of Dawson, Iowa, and died November 14, 2019 at his home in Perry, Iowa. Gordon was 77 years old. Gordon attended rural school, Washington Township School, and graduated from Central Dallas High School. He was married to Carolyn Faux in 1972. Gordon and Carolyn were parents of son Anthony and later married Ruth Ann Cosner and they were the parents of Kenneth. Some years passed when Gordon and his significant other, Katherine Moore began their lives together in Perry. Gordon owned and operated the Chocolate Shop in Perry where he made many friends. He enjoyed country music, wood working, among other interests. Gordon worked as a carpenter and later for Oscar Mayer which later was owned by IBP and then Tyson at the time he retired. For those many years he was the night maintenance man. Gordon was preceded in death by his parents Orville and Elva; and his brothers Keith Orville Jones and Dale Clell Jones. He is survived by his sons Anthony “Tony” Jones and his wife Jo of Grand Junction; Kenneth Jones and his wife Jennifer Kempf of Perry; grandchildren Cole Jones of Dayton; Brayden Kempf-Jones and Tucker Kempf-Jones, both of Perry; sister Flossie Morrell and her husband Kenneth of Adel; nephews Steve Morrell and his wife Jan of Adel and Scott Morrell of Portland, Oregon; Bonnie Orfield, Jefferson, Iowa, other relatives and friends.

The family of Gordon Bernard Jones "Gordy" created this Life Tributes page to make it easy to share your memories.

Send flowers to the Jones family.