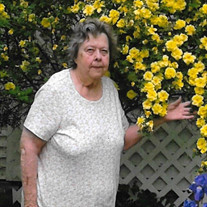 Hastings Funeral Home in Perry is in charge of arrangements for Geraldine “Susie” Reed, 90, of Redfield. Susie died January 1, 2022 at MercyOne Medical Center in Des Moines. Funeral Services will be held 2:00 p.m. Friday, January 7, 2022 at Hastings Funeral Home. Visitation will be held one hour prior to the service. Face masks or face coverings are required to enter the funeral home. In the early morning of January 1, 2022, the Lord called Susie home at the age of 90 years, 5 months, 17 days. Susie’s funeral was held at Hastings Funeral Home, Perry, Iowa at 2:00 p.m. Friday, January 7, 2022. Words of comfort by Pastor James Weaver , of New Hope Assembly Of God Church, Urbandale, Iowa. Her Honorary Casket bearer was Troy Griffith, active casket bearers were Allen Sanders, Rob Sanders, Hunter Sanders, Traeten Sanders, Ralph Stanley and Wesley Stanley. The music was I Can Only Imagine, I’ll Leave This World Loving You, Heaven Just Got Sweeter For You and Serenaded By Angels. Susie was buried at Violet Hill Cemetery, Perry, Iowa. Geraldine “Susie” Summerson Reed, daughter of Verne and Mary Summerson, was born July 15, 1931 at home on the farm near Dawson, Iowa. Grandma Madren delivered her. Susie grew up there and went to Dawson School, where she met her lifelong friend June Lee Ulrich. Later on she met Leo Reed and the two were united in marriage on September 1, 1950 on her family’s farm. Leo joined the Air National Guard and they moved to Bangor, Maine, then he got transferred to another base, before he was discharged. Susie came back to Dawson and Leo arrived shortly after. They welcomed their first baby girl Mary Sue into the world in 1951. Followed by Dorothy in 1953, Delores in 1954, and Deborah in 1957. For several years the family lived on the farm and Susie and Leo worked the land, before moving closer to Des Moines. Susie became a nurse and caregiver to many She was a wonderful mom and homemaker. Leo bought a home to remodel and the two worked hard, made it beautiful, sold it, and did it all over again. In 1987 they moved to Redfield and started their final DIY home. They enjoyed fixing it up and living there. They also enjoyed camping and fishing until Leo’s death in 1994. Susie continued living in their home where many happy family events were celebrated, birthdays, holidays, BBQ’s, weddings, and get togethers. She provided a place for all the grandkids to come to, whether it was a sleepover or just to borrow an egg. When the great grandkids came along Susie welcomed them in and loved to babysit them and loved to help save her grandkids some money. She loved her grandkids and great grandkids more than anything. She always had an open door for them and their friends after school. For Susie’s 90th birthday in July, the girls along with many friends and family surprised her with a party to celebrate her special day. She was so happy. Sadly, by October Susie’s health declined and she got weaker and weaker. On December 15th she was admitted to Mercy Hospital in Des Moines where she remained until her heavenly trip home. Susie is survived by her 4 daughters, Mary Sue Reed, Dorothy (Allen) Sanders, Delores Hill, and Deborah (Joseph) Pivonka , 8 grandchildren, 18 great-grandchildren, 4 great-great-grandchildren, many cousins, nieces, nephews, and friends. She is preceded in death by her parents Verne and Mary Summerson, her husband Leo Reed, sisters Imogene Stanley and Maudie Griffith, great-grandson Jack Andrew Hill and son-in-law Fred Hill. Memorials in her name may be sent to Hastings Funeral Home Box 204 Perry, Iowa 50220 [email protected] hastingsfh.com 515 465-4691

The family of Geraldine "Susie" Reed created this Life Tributes page to make it easy to share your memories.

Send flowers to the Reed family.