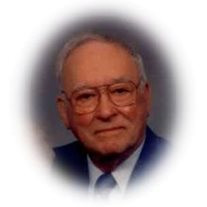 Garold William McMullin, son of Earl Leon McMullin and Ida Lucille Millard McMullin, was born July 28, 1918 on a farm near Minburn and died August 20, 2005 at the Perry Lutheran Home under the care of Mercy Hospice. He was 87 years and 22 days old. In 1935 Garold graduated from Washington Township School where he was active in sports such as basketball, track and baseball. Garold worked for local farmers and also worked for Panther Auto and Skelly Oil Co. He also drove a school bus. Garold met Alice Jane Stickel in 1937 and after about four years of courtship, they married January 1, 1941 at First Christian Church in Perry. They were blessed with three children: Dan, Diane and Denise. Garold enlisted in the U.S. Air Corps in September 1942. He trained as a glider pilot and then entered the Aviation Cadet Program in April 1943. He trained at Kelly Field in San Antonio, California and then in Sikeston, Missouri; Winfield, Kansas; and Waco, Texas where he was awarded his wings and became a 2nd Lieutenant in the Army Air Corps. Garold then transferred to Liberal, Kansas and attended B-24 four engine school. He later was at Lowrey Field in Denver, Colorado and then to Texas where he was discharged in November as a 1st Lieutenant. Garold and Alice started farming in Washington Township in 1946 and farmed until retirement in 1980. He served as ASC Township Chairman for several years and sealed grain. He also inspected sealed crops for several years. Garold enjoyed serving for many years as Township Trustee and Chairman of the Election Board, also serving on the Dallas County Conservation Board. He was a member of the Farm Bureau and the National Farmers Organization. Garold was baptized at Washington Chapel in 1931 and joined the First Christian Church in 1946. He served on the Building Finance Committee for the new church and served as C.M.F. Chairman. He was the Stewardship Chairman for several years, Chairman of the Evangelism Committee and other committees of his church. Garold served as Deacon, Elder and was Chairman of the Trustees Committee for several years. In addition of his love for his family and church, Garold enjoyed servicing and maintaining machinery, autos and trucks. He also enjoyed yard work, improving properties, shopping, dining out, associating with friends and watching basketball on T.V. Garold was preceded in death by his parents, his wife Alice Jane, May 22, 2000; and 2 sisters: Flossie Case and Darline Sawtell. He is survived by his son Dan McMullin and his wife Donna of Evansville, Wyoming; 2 daughters: Diane McCarty and her husband Joe of Perry, Iowa; and Denise Ingebritsen and her husband Tom of Ames, Iowa; 5 grandchildren: Brad, Todd, and Scott McMullin; Alison McCarty and Isaac Ingebritsen; 5 step-grandchildren: Eric Ingebritsen, Tracy Mattison and her husband Rich; Richard Buchanan; Melinda Dobby; and Becca Linnig; and 9 great-grandchildren.

Garold William McMullin, son of Earl Leon McMullin and Ida Lucille Millard McMullin, was born July 28, 1918 on a farm near Minburn and died August 20, 2005 at the Perry Lutheran Home under the care of Mercy Hospice. He was 87 years and 22 days... View Obituary & Service Information

The family of Gerald McMullin created this Life Tributes page to make it easy to share your memories.

Send flowers to the McMullin family.