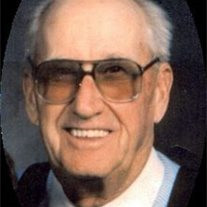 Francis Willard Strait, son of John Strait and Elizabeth Wilson Strait, was born August 19, 1917 in Perry, Iowa and died April 1, 2007 at the Madrid Home for the Aging at the age of 89 years, 7 months and 12 days. Pete, as he was lovingly known, grew up in the Perry area. he attended Spring Valley Township District 8 School. Pete joined the Army in 1941 and served in Sicily Normandy, Rhineland Ardennes, Northern France, and Central Europe. While stationed in England, he met Maria Teresa Holden. They were married on August 18, 1945 in Liverpool, England. To this union eight children were born: Peter, Tom, Steve, Greg, Chris, Brian, Teresa, and Jim. After the end of WWII, Pete returned to the U.S. and settled in Salin,a Kansas near his sister. Marie, as she was fondly known, rejoined her husband six months later. They lived in Kansas for several months before moving to the Perry, Iowa area. The family lived in Jamaica where Pete had his own shop, Perry where he worked for Davisson Chemical, Dallas County, rural Ogden, were he operated a service station and rural Boton before moving back to Perry. He worked at Anderson Trucking in Bouton, Webster Trucking in Minburn, Gib Smith Trucking in Perry and as a driver for the State of Iowa Liquor Commission. He had worked for Solar Aircraft, Swift and Armor, Farmers Hybrid and had been a janitor at St. Patrick School and Church. Pete was a member of St. Patrick Church in Perry and the American Legion Post #85. He enjoyed tinkering fixing things, and speing time with family. Pete was preceed by his parents; wife, Marie; 5 brothers, John, Jim Russell, and infant brother and 4 sisters, Luella, Margaret, Valena, and Edna. He is survived by eight children, Peter (Rozanne)Strait of Cedar Falls, Tom (Mary) Strait of Ankeny, Stephen (Pat) Strait of Woodward, Greg(Dee) Strait of Perry, Christopher (Tami)Strait of Perry, Brian 9Lisa)strait of Madrid, Teresa Ann (Jim) Carmichael of Oskaloosa, James (Becky) Strait of Montana; 15 grandchildren, and 5 great-grandchildren; a sister-in-law, Virginia Strait of Perry; nieces, nephes, other relatives and friends.

Francis Willard Strait, son of John Strait and Elizabeth Wilson Strait, was born August 19, 1917 in Perry, Iowa and died April 1, 2007 at the Madrid Home for the Aging at the age of 89 years, 7 months and 12 days. Pete, as he was lovingly known,... View Obituary & Service Information

The family of Francis Willard Strait created this Life Tributes page to make it easy to share your memories.

Send flowers to the Strait family.