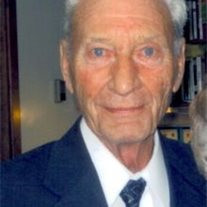 Floyd Truxton King, was born July 18, 1926 in Mountain Grove, Missouri and died August 26, 2007 at the Dallas County Hospital in Perry, Iowa, at the age of 81 years 1 Month, 8 Days. Floyd grew up in and around the Redfield area. When only 17, he enlisted in the U.S. Navy on March 24, 1944, and served in the South Pacific aboard the USS Wilkes-Barre, a light cruiser. He was honorably discharged February 8, 1946. For many years he and Reve attended the ship's reunions where memories were shared. Floyd married Reve Silvey on August 18, 1949 in Boone County. They were parents of two sons: Dennis and Randal. They lived in Des Moines where Floyd worked for Kohles Chimney Company. They later moved to Loganville, Wisconsin in 1950 to work for John King on the farm. In 1951 they returned to Perry where they farmed on the Chester Corbus farm northeast of Perry. Floyd farmed at various locations until February of 1980 when he retired from farming and had a sale. Floyd and Reve moved into Perry to make their home. Floyd purchased a truck and started trucking seed beans and corn for Asgrow Seed Company. He retired in 1994. Floyd's passion was fishing. Walleyes were his favorites! His sons and grandsons accompanied him on many fishing trips to Canada and they have many warm memories of those times. Floyd also enjoyed gardening, boating and camping. He was quite a history buff also and was a talented story teller. Floyd was a member of the Elks Lodge #407 in Perry; Kinkead-Martin American Legion Post # 583 in Rippey and the Floyd Foster VFW Post # 2060 in Perry. He was preceded in death by his parents; 3 brothers: John, Kenneth, and Gerald; and 2 sisters: Freda Crawford and Ruby Bandy. Floyd is survived by his wife of 58 years, Reve; two sons: Dennis K. King and wife Karen of Nashville, TN; and Randal F. King and wife Marge of Loveland, Co; four grandsons: Chad, Matthew, Justin, and Tyler King; brother Charles King of King, WI; nieces, nephews; other relatives and many friends.

Floyd Truxton King, was born July 18, 1926 in Mountain Grove, Missouri and died August 26, 2007 at the Dallas County Hospital in Perry, Iowa, at the age of 81 years 1 Month, 8 Days. Floyd grew up in and around the Redfield area. When only 17,... View Obituary & Service Information

The family of Floyd Truxton King created this Life Tributes page to make it easy to share your memories.

Send flowers to the King family.