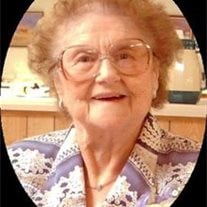 Evelyn Ruth Waldo, daughter of Denzil Dewitt Bartlett and Neva Merle Quigley Bartlett was born September 5, 1915 in Scranton, Iowa and died November 6, 2010 at the Rowley Memorial Masonic Home in Perry, Iowa at the age of 95. Evelyn attended school in Scranton. On May 26, 1932 she married Duard Owen Waldo. They were parents of four children, Patricia, Charles, Douglas, and Robert. Evelyn was a wonderful wife, mother and grandmother. She was lovingly called GG by much of the family for great-grandma. Evelyn was always there for her family and as her family grew, her role grew. She committed her life to Christ as a young adult. She was the spiritual leader of her family. When prayer was needed, the family relied on her. She leaves a wonderful Christian heritage. She kept a journal and she wrote that raising her family had been her greatest joy. Evelyn had a wonderful sense of humor and has left her family with great memories. She loved the fall season because of the beautiful trees. Evelyn was a wonderful cook and was famous for her cinnamon rolls and pies. Her abilities as a cook led her to a career of cooking at the hospital, County Care Facility and restaurants. She and her husband Duard owned and operated the Wayside Caf� in Jefferson for many years. Evelyn enjoyed reading and working cross word puzzles. She attended the Open Bible Church and First Assembly of God Church. Evelyn was preceded in death by her parents, her husband Duard, sons Robert and Charles and daughter Patricia M. Baugh and son-in-law Dean Baugh; granddaughter Patricia Darnell Waldo and great grandson Michael Dean. Evelyn will be lovingly remembered by her son Doug and his wife Ramonia of Jefferson; daughters-in-law Jane Waldo and Sharlene Waldo Handley of Jefferson; grandchildren Carol Johnson (Joe), Dennis Baugh (Cheriann) Connie Leichtnam (Jim) and Sheri Greer all of Grand Meadow, MN; Ruth Nold (Lary) of Elkton, MN; Rhonda Randleman of Jefferson; Tom Friess (Cindy) of Perry; Rick Friess and Diane Pearson (Rich) both of Rippey; Rhonda Woltz (Kurtis) of Grand Junction; Peggy Leege (Michael) of Ottumwa; Julia Krause (Dan) of LeMars; Philip Waldo (Naomi) Waldo of Boone; David Freeman (Susan) of Boone; and Teri Leedom (Buck) of Wichita, KS; 40 great-grandchildren and 53 great-great grandchildren; her sister Velma Hart of Lake City; nieces, nephews, other relatives and many friends.

The family of Evelyn R. Waldo created this Life Tributes page to make it easy to share your memories.

Send flowers to the Waldo family.