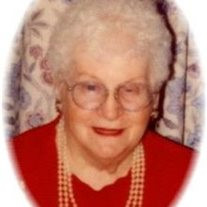 Eva Lou Christensen Jensen was born November 21, 1923 in Fonda, Iowa and died March 6, 2006 at Mercy Hospice in Johnston, Iowa at the age of 82 years, 3 months and 15 days. Eva grew up in the Bradgate, Iowa area. On November 1, 1942, Eva was united in marriage to Melford Peter Jensen in Emmetsburg, Iowa. They were the proud parents of seven children: Douglas, Paul, Janet, Debbie, Chris, Gary and Sherry. They made their home in Emmetsburg until 1961, when Melford took a job as a dairy foreman in Elsie, Michigan. During that time Eva stayed busy as a homemaker taking care of her seven children and later became a Certified Nurses Assistant. In 1986, after Melford's retirement, the couple moved to Perry, Iowa. Eva loved to decorate cakes. She also like to sew as well as do other arts and crafts, and she liked to play Bingo. Eva was preceded in death by her parents; her husband in 1988; 4 brothers; and 1 sister. She is survived by her 3 daughters: Janet Jensen of Des Moines, Debbie Kent and her husband Jim of Des Moines and Sherry Parsley and her husband William of Cedar Rapids; 4 sons: Doug Jensen and his wife Eva of Harrison, Michigan, Paul Jensen and his wife Susan of Lansing, Michigan, Chris Jensen and his wife Marlys of Perry, Iowa and Gary Jensen of Adel, Iowa; 11 Grandchildren: Troy Jensen and his wife Kendra of Ovid Michigan, Teresa Castell of Waukee, Raymond Reyes and his wife Sarah of Michigan, Kristi Houska and her husband Joe of Elsie, Michigan, Wade Jensen and his wife Tina of Ovid, Michigan, Keri Knutson and her husband Curtis of Des Moines, Gary Jensen Jr. and his wife Erin of Adel, Charmaine Jensen and Jennifer Jensen both of Michigan, Jayson Law of Cedar Rapids and Emily Jensen of Michigan; 20 great-grandchildren; 2 great-great grandchildren; 1 sister: Agnes Andersen and her husband Carl of Laurens, Iowa; 1 brother: Marvin Christensen and his wife Lucy of Gilmore City, Iowa; nieces, nephews, other relatives and many friends.

The family of Eva L. Jensen created this Life Tributes page to make it easy to share your memories.

Send flowers to the Jensen family.