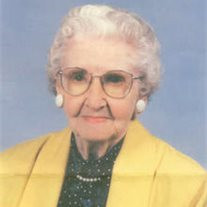 Ethel Ena Correy, daughter of Louis Herman Oberkamper and Neva Rebecca Witter Oberkamper , was born February 9, 1906 in Cooper, Iowa and died June 14, 2005 at the Rowley Memorial Masonic Home in Perry, Iowa. Ethel was 99 years, 4 months and 5 days. Ethel was the second child born to Louis and Neva. She graduated from Cooper High School . Ethel lived in Cooper until her marriage on October 30, 1926 to Irwin P. Correy in Guthrie Center. They lived after marriage in Jamaica and then farmed south of Coooper until 1938. Ethel and Irwin then moved to Rippey to make their home. Irwin was hurt while working and was bedfast from 1953 to 1971. Ethel cared for him in their home all of those years. Ethel had worked as a cook for the Rippey School for 10 years and later at the Post Office in Rippey until retiring in the mid 70's. Ethel was a member of the Rippey United Methodist Church and was a lifetime member of the Order of the Eastern Star as well as being a member of the Rebekah Lodge. She enjoyed crocheting, homemaking and quilting. Ethel was well known for her excellent cooking and for fifteen years made chili and cinnamon rolls for the BRR ride celebrated in Rippey. Ethel was preceded in death by her parents; infant sister Virginia; daugher Phyllis in infancy; husband Irwin; one brother Lee Oberkamper; and 4 sisters: Juanita Gustafson; Naomi Hamilton; Dorothy White; and Florence Logan. Ethel is survived by her son Mahlon Correy and his wife Margaret of Cape Coral, Florida; three daughters Norma J. Schlarbaum of Rippey, Iowa; Marilyn M. Church and her husband James of Des Moines, Iowa; and Janice Correy of Ames, Iowa; 10 grandchildren: Dennis Schlarbaum and wife Curta; Ronda Zimmerman and her husband Steve; Michael Schlarbaum and wife Eucaria; Jeffrey Correy; Steven Correy and wife Jen; Mark Friel; David Church and his wife Kim; Cathy Blaskovich; Andrew Church; and Brian Church and his wife Marcia. Ethel is also survived by her great grandchildren and great-greats: David Schlarbaum and wife Heather and their triplets: Dayna, Brianna, and Samantha; Todd Schlarbaum and Katie Schlarbaum; Gregory Pyles and wife Melissa and their son Alex; Corie Bates and husband Larry and their children Chloe, Noah, and Zoe; Kyle Francis and wife Krystal and their son Karl; Branden Schlarbaum and wife Brittany and their daughter Emma; Christopher Schlarbaum and Jennifer Schlarbaum; Westley Correy and Katie Correy; and Jonas, Johnny, Jacob, Matthew, Jimmy, Corey, Alison, Kyle and Nathan Church; two sisters-in-law: Berniece Oberkamper and Elowene Fisher; numerous nieces and nephews; other relatives and friends.

The family of Ethel Correy created this Life Tributes page to make it easy to share your memories.

Send flowers to the Correy family.