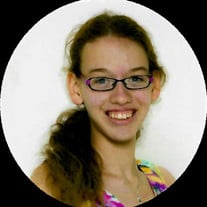 Services for Emma Rose Dahl were held from 1:00 p.m. until 3:00 p.m. Saturday, February 20, 2021 at the Bayard Community Center. Graveside Service followed at Dodge Center Cemetery in Bagley, Iowa. Casket bearers were: Mike Dahl, Todd Dahl, Darwin Larrison, Shane Wolf, Jared Dahl, and Randy Dvorak. Hastings Funeral Home in Perry was in charge of these arrangements. Emma Rose Dahl, daughter of Jeffrey Eugene Dahl and Jennifer RaeAnn Joy Dahl was born March 15, 2000 in Jefferson, Iowa. Emma received her angel wings February 10, 2021 after a valiant battle with cancer. She was in the arms of her parents and under hospice care at her home in rural Coon Rapids, Iowa when she took flight. Emma lived with her parents in Bayard until 2009 and then they moved to their present farm in rural Coon Rapids. Emma graduated Coon Rapids High school in 2018. She was a bright student, enjoying her time as Student Body President and being a part of speech club with emphasis on dramatic readings. Emma was a very independent woman who handled her cancer with determination and grace. Reading was a large part of her life, often devouring 1200 pages or more in a week. Perhaps that was a part of her coping with her cancer. With her vast reading interests, Emma wrote novels, one perhaps to be published soon. Listening to the band “Queen” gave her comfort and strength during these days since her diagnosis in August of 2017. Emma never gave up and focused on attending college at the University of Northern Iowa, majoring in History. Emma was preceded in death by her paternal grandparents Tom and Jan Dahl. She is survived by her parents Jeff and Jennifer, maternal grandparents Ernie and Virginia Joy of Humeston, IA; uncles Mike Dahl (Jennifer) of Scranton; Todd Dahl (Gloria) of Bayard; Jerry Joy (Christy) of Pflugerville, TX; aunts Kristine Larrison (Darwin) of Bettendorf, and Ann Dahl of Liberty, MO; great uncles Ted Dahl of Waukesha, WI, and Jerry Hanen (Janet) of Branson, MO; great aunt Ruth MacDonald (George) of Rising Sun, MD; several other great aunts and uncles; numerous cousins; other relatives and many friends. Memorials are suggested to Unity Point Hospice and can also be sent to Hastings Funeral Home – 1417 2nd Street P.O. Box #204 – Perry, IA 50220.

The family of Emma Rose Dahl created this Life Tributes page to make it easy to share your memories.

Send flowers to the Dahl family.