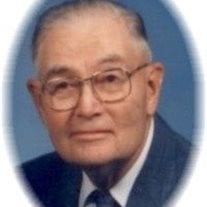 Ralph Eldon "Pink" Grow, son of Thomas Leonard Grow and Grace Addie Brush Grow, was born October 2, 1916 on a farm 2 miles west of Rippey, Iowa and died April 29, 2006 at the Rowley Memorial Masonic Home in Perry, Iowa at the age of 89 years, 6 months and 27 days. Eldon or "Pink" as he was well known grew up on a farm 2 miles west of Rippey. He attended Rippey Consolidated School and graduated with the Class of 1934. On September 24, 1939, Pink was united in marriage to Esther Lucille Noack at the Christian Church in Perry. They were the proud parents of 2 daughters: Vickie and Darla. They made their home on a farm 1 � miles east of Rippey where Pink farmed for over 45 years until retiring in 1983. In 1983 after Pink retired, he and Esther moved to Perry, where they have lived since. Pink stayed busy after retiring by working at Hastings Funeral Home where he was employed for 20 years. Pink loved music and singing especially in the choir. He also loved to fix things and was especially good at fixing furniture. He also enjoyed fishing. Pink was a long time member of the Rippey United Methodist Church and was a member of the Choir there for over 60 years. He was also a long time member of the Lions Club and the Greene County Beef Producers. Pink was preceded in death by his parents; his brothers: Clifton in infancy, Glen, Miles, Darwin and Harold; and his sisters: Cleone and Caroline. He is survived by his wife Esther of Perry; his daughters: Vickie Striegel (Jim) of Delta, Iowa and Darla Grow and her significant other Tom Johnson of Lincoln, Nebraska; 5 grandchildren: Dan Striegel (Andrea) of Delta, Iowa, Tom Striegel of Des Moines, Iowa, Becky McCullough (Ryan) of Lake In The Hills, Illinois, Cathy Doorneweerd (Curtis) of Lester, Iowa and Garrett Matuska of Lincoln, Nebraska; sisters-in-law: Alice Grow of Perry, Iowa, Eleanor Noack of West Des Moines, Iowa and Edith Taylor of Charleston, West Virginia; nieces, nephews, other relatives and many friends. ** Hastings Funeral Home in Perry was in charge of arrangements and memorials to the Rippey United Methodist Church may be left at the funeral home. **

The family of Eldon Grow created this Life Tributes page to make it easy to share your memories.