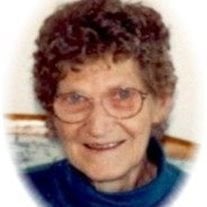 Edna JoAnne Edmondson, daughter of John Nicolaisen and Meta Leibe Nicolaisen, was born December 21, 1938 in Perry, Iowa, and died December 23, 2007 in Perry, Iowa at the age of 69 years and 2 days. Edna was a life-long resident of Perry. She graduated from Perry High School in 1956. Edna Married Norman Eldon Edmondson on November 8, 1958. They were parents of two children, Craig and Cathy. Edna worked for Fareway during High school and for a time thereafter. She worked cleaging 3000 acres of bean fields for Riley farms for seventeen years, passing on her hard working ethics to Craig and Cathy. Edna's love of cooking and baking made her a natural as an employee of Bill and Kay's Maid Rite for over ten years until they closed. Edna always raised large gardens which she loved. She canned and shared her produce. Edna also crocheted, making many afghans for her family and friends. She seemed to thrive on hard work, and was happiest when cooking and entertaining. Edna was preceded in deathy by her parents; two brothers, Hans and Nick; sisters, Anna Alexander, Eleanore Martin, and Carol Lightchuck. She is survived by her husband of 49 years;son, Craig and wife Julie of Ames; daughter, Cathy Greimann and husband Steve of Perry; 8 grandchildren, Ryan, Michelle(Brody), Brandon, Rachel, Emily, Adam(Jennifer), Michelle(Thad) and Caren;2 great grandchildren, Leigha and Avery; brothers, John Nicolaisen and wife Betty of Omaha, NE, and Robert Nicolaisen and wife Betty of Perry; sisters, Gertrude Shorey and husband Ray of Peoria, IL, and Martha Mikelson of Glidden; sisters-in-law, Margaret(Peggy) Nicolaisen, Alberta Nicolaisen, and Katie Edmondson all of Perry, Marilyn Edmondson of Petaluma, CA.;brothers-in-law, Darrel Edmondson and wife Beverly of Perry , and Ron Lightchuck of Beatric, NE; nieces, nephes, other relatives and many friends.

Edna JoAnne Edmondson, daughter of John Nicolaisen and Meta Leibe Nicolaisen, was born December 21, 1938 in Perry, Iowa, and died December 23, 2007 in Perry, Iowa at the age of 69 years and 2 days. Edna was a life-long resident of Perry. She... View Obituary & Service Information

The family of Edna JoAnne Edmondson created this Life Tributes page to make it easy to share your memories.