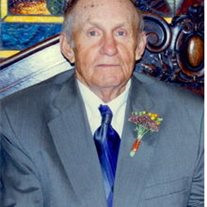 Earl Floyd Lingren, son of Floyd Harry and Elsie Mabel Freie Lingren, was born March 6, 1925 at his parents' farm northwest of Boxholm, and died Friday, November 21, 2008 at his home in Pilot Mound, Iowa at the age of 83 years, 8 months, and 15 days. Hank, as he was known by his family, attended and graduated from the Jordan Consolidated School in 1942. Following graduation, Earl worked at the Farmer's Elevator in Boone until October 14, 1943, when he entered the United States Army and served in World War II. He was honorably discharged on November 10, 1945, and returned home to farm with his dad. While serving in the war, Earl received numerous medals including two purple hearts and the Bronze Star. On October 22, 2001, Earl was awarded the "Special Diploma" from the Government of France for his contribution to liberate France from the Axis Powers in World War II. When he returned from the war, he managed the Erickson Elevator for two years. On November 8, 1946, he was united in marriage with Betty Jean Wirtz at the Prairie Center Church north of Jordan. To this union, five children were born: Steven, Stanley, Melinda, Machelle, and Lorna. After their marriage, the couple lived in Boone, and in 1948 they moved north of Boone to start farming. In 1953, they moved to rural Pilot Mound. In 1969, they moved to their present farm and in 1996, they built their "retirement" home on the farm. In 2006, the couple celebrated their 60th wedding anniversary. Earl farmed and raised cattle and hogs. His hobbies included watching and helping his grandchildren participate in 4-H and raising draft horses. Earl once was quoted saying, "Farming is my hobby, since there's no money in it." He was a member of the United Methodist Church, Groom-Kinsey American Legion Post #16, 40 & 8, the D.A.V., the 9th Infantry Division Association, and was honored along with his wife and son Stanley as an Iowa Master Pork Producer in 1994. Earl was a founding member of the Boone County Pork Producers and active in the promotion of the pork industry. He had been a member of the school board and elevator board and was a 4-H leader for many years. In 1983, Earl, Betty and their sons were given the Meritorious Service to 4-H Award. For 35 plus years, Earl watched his children and grandchildren show their animals from the north side of the show ring. In 2001, Earl was awarded the 4-H Alumni Award by the Boone County Youth and 4-H Committee. Earl was preceded in death by his father, Floyd Lingren in 1984, his mother, Elsie Lingren, on May 30, 2000, and a daughter Machelle Peggy in infancy. He is survived by his wife, Betty of Pilot Mound, two sons: Steven Lingren and his wife Chris of Ogden and Stanley Lingren and his wife Cheryl of Pilot Mound; two daughters: Melinda Heater and her husband Tom of Jefferson and Lorna Lingren-Scott and her husband Rob Scott of Pilot Mound; 16 grandchildren: Jenifer Badger and her husband Brent of Bagley, Iowa; Jessica Savits of Marshalltown, Iowa, Jessica Bruere of ��Grimes, Iowa, Nicole Shearer and her husband Jay of Waterloo; Ricky Geisler of Sheridan, Wyoming; Emily Geisler and Brooke Lingren both of Ogden; Allison Lingren of Lincoln, Nebraska; Alexa Lingren, Bryce Scott, Aaliyah Scott, Vanessa Scott, Ebony Scott, Viatris Scott, Kaleb Scott and Nate Scott all of Pilot Mound, Iowa. He is also survived by four great-granddaughters: Kamden Machelle Badger, Abigail Janine Badger and Elise Violet Badger of Bagley and Brianna Bruere of Grimes, Iowa and one great-grandson, Brock Lennon Badger of Bagley; other relatives, and many friends. Hastings Funeral Home, Jefferson, Iowa 50129 www.hastingsfh.com [email protected]

Earl Floyd Lingren, son of Floyd Harry and Elsie Mabel Freie Lingren, was born March 6, 1925 at his parents' farm northwest of Boxholm, and died Friday, November 21, 2008 at his home in Pilot Mound, Iowa at the age of 83 years, 8 months, and... View Obituary & Service Information

The family of Earl F. Lingren created this Life Tributes page to make it easy to share your memories.

Send flowers to the Lingren family.