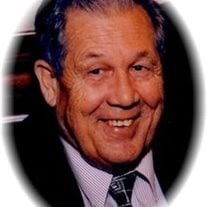 Douglas Erwin Clark, 78, of Perry was born in Jefferson, Iowa. He was the son of John Erwin and Anna Kelley Clark. He attended country school in the Jefferson and Cooper areas. Doug enlisted in the Navy at age 17 and attended Quartermaster School. He served in the Philippines. Doug was honorably discharged in June of 1946. Doug was united in marriage to Wilma Clutter Dec. 4, 1948 at the Methodist Church in Gowrie. The couple moved to Minneapolis while Doug attended refrigeration school. After his schooling, they returned to Gowrie for a time, where their son James Erwin was born. The family moved to a farm near Churdan, and from there to Jefferson, where Doug worked for the Safeway Grocery Store. Doug was transferred to a store in Ft. Dodge, where their son Larry Jo was born. Later he began working for Fareway Stores. While working for Fareway, the family moved to Carroll and then to Perry, where their daughter Sandra Jean was born. In April of 1961, Doug joined the Perry Police Dept. where he achieved the rank of Lieutenant. While on the force, he and his wife purchased the Dry Cleaning Plant and changed the name to Wil Do Cleaners, a combination of his and Wilma's names. He left the police force in 1972, joining Wilma at the dry cleaning business full time. In 1993, Doug retired from the dry cleaning business, leaving his daughter Sandra to operate the business. Doug enjoyed golf, bowling, camping and bike riding. He and Wilma spent their winters in Texas. Doug was a member of the Methodist Church in Perry, the Elks Lodge in Perry, and was a member of the Dallas County Peace Officers. Doug was preceded in death by his parents; his brothers Stanley Clark and Dennis Kennedy. He is survived by his wife Wilma of Perry; sons: Jim Clark (Kathy) of Papillion, Nebraska and Larry Clark (Jan) of Cumming; daughter: Sandy Holmes (Ben) of Perry; grandchildren: Erin Michelle Clark; Ryan James Clark (Tami); Bryan Jo Clark (Julie); Kristen Anne Lenaghan (Andrew); Dustin John Holmes and fianc�e Rachael Terrill; and Matthew Douglas Holmes; great-grandson: Brandon Clark; brother: Phillip Kennedy (Deb) of Grimes; sisters: Joan Richards of Canada; Rebecca Nash (John) of Cedar Rapids; and Judy Cosens (Russ) of Jefferson; and sister-in-law Muriel Clutter of Clarion; nieces, nephews, other relatives and many friends.

Douglas Erwin Clark, 78, of Perry was born in Jefferson, Iowa. He was the son of John Erwin and Anna Kelley Clark. He attended country school in the Jefferson and Cooper areas. Doug enlisted in the Navy at age 17 and attended Quartermaster School.... View Obituary & Service Information

The family of Douglas Erwin Clark created this Life Tributes page to make it easy to share your memories.

Douglas Erwin Clark, 78, of Perry was born in Jefferson, Iowa....

Send flowers to the Clark family.