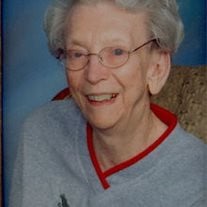 Dorothy Madie Young, daughter of John Harten and Madie Mary Hummel Harten was born July 15, 1916 on her parents' farm near Beaver, Iowa and died March 28, 2008 at the Dallas County Hospital in Perry, Iowa at the age of 91 years, 8 months and 13 days. Dorothy attended school in Beaver for a time and graduated from Grand Junction High School. She was married to Nelson Durfee Young on March 21, 1936 at the Brethren Parsonage in Beaver. They were attended by Don and Edith Anschutz. Nelson and Dorothy were parents of two sons: Richard and Jerry. The family lived on a farm near Rippey for three years and then moved into Rippey. After Nelson died on February 16, 1979, Dorothy continued to live in their home. Following her son Jerry's death May 24, 2000, Dorothy's health declined and ultimately she made her home with son Richard and wife Dolores for a time before entering the Rowley Home. Dorothy's love of cooking made her a natural to organize the hot lunch program at Rippey Consolidated school where she worked until 1964. She then worked at the Greene County Hospital and retired from there in 1981. Dorothy was a member of the Rippey United Methodist Church and was a former Rebekah Lodge member. In earlier days, she had sung for funerals. Dorothy was a sweet woman who always thought the best of others and never spoke an unkind word. She enjoyed sewing, crafts, crocheting, playing canasta, crosswords, flowers, and fishing. Dorothy was a Hawkeye fan and especially enjoyed their basketball games. Dorothy's family was her greatest joy. She was a caregiver to her parents and sister Betty. Dorothy loved and was proud of her children and grandchildren. Her family enjoyed gatherings at Grandma's and her awesome fried chicken and gravy and the great apple crisp. She was preceded in death by her parents, husband Nelson, son Jerry, brothers Paul and Harold Harten and sister Betty Mally. Dorothy is survived by her son Richard Young and wife Dolores of Norwalk, Iowa; daughter-in-law Pat Young of Waukee, Iowa; 9 grandchildren :Patrick Young (Heidi); Debbie Hammer (Neil); Dan Young (Lisa); Diane Bequeaith (Shaun); Sheri Shipman (Rick); Shelly Kuble(Chris); Rick Young (Cheryl); Mark Young (Dinah); and Lisa Mealey (Todd); 18 great-grandchildren; sister Louise Chandler of Washington, Iowa; sister-in-law Velma Young Bandy of Jefferson, Iowa; nieces, nephews, other relatives and friends.

Dorothy Madie Young, daughter of John Harten and Madie Mary Hummel Harten was born July 15, 1916 on her parents' farm near Beaver, Iowa and died March 28, 2008 at the Dallas County Hospital in Perry, Iowa at the age of 91 years, 8 months and... View Obituary & Service Information

The family of Dorothy M. Young created this Life Tributes page to make it easy to share your memories.

Send flowers to the Young family.