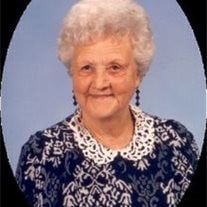 Dorothy P. Thornburgh, daughter of Jesse E. Stark and Mildred Adella Tipton Stark, was born June 6, 1921 in Dover, Oklahoma and died February 21, 2008 at the Greene County Medical Center in Jefferson, Iowa at the age of 86 years. Dorothy attended school in various places as her family moved often. She graduated from Rippey High School in 1939. On October 22, 1939 she married Donald D. Thornburgh at the Methodist Church in Jefferson. They were the parents of two children, Jerry and Judy. The family made their home in the Cooper area where she lived most all of her life in the same farm house. Dorothy's life centered around cooking. She had cooked at various restaurants, including Schoppes. She was very talented in all areas of her passion, however, she was known best for her marvelous candies, delicious pies and beautiful wedding cakes. She had demonstrated candy making at the Iowa State Fair and developed a large following of customers near and far. Dorothy loved sharing her love of cooking with friends and neighbors and would be the first to arrive in times of needs, armed with her gifts of food. In keeping with her love of cooking, Dorothy was fond of entertaining. She had collected many sets of dishes and all types of glassware and silver. Dorothy also enjoyed flowers and was active with the Jefferson Garden Club. As a member of the Cooper United Methodist Church and the United Methodist Women, she was always willing to furnish food and work any event. She had been a member of the DOES in Jefferson and the Culture Club in Cooper. Wintering in Texas the past 15 years had been one of Dorothy's joys. Dorothy was preced in death by her parents; husband; grandson, Tony Mansfield; daughter and son-in-law, Judy and Dwight Mansfield; and brother, Delmar Stark. She is survived by her son, Jerry and wife Karen of Woodward, Iowa; two grandchildren, Patrick Thornburgh and wife Erin of New Virginia, Iowa and Shellie Arentson and husband Emory of Boon, Iowa; 10 great-grandchildren, Hannah, Megan, Titus, Esther, James, Silas, Mary, and Ezra Arentson, and Travis and Trevor Thornburgh. Dorothy is also survived by her sister, Betty Snow and husband Bill of Des Moines, Iowa; sister-in-law, Grace Stark of Lake Hills, Texas; nieces, nephews, other relatives and many friends.

The family of Dorothy Phyllis Thornburgh created this Life Tributes page to make it easy to share your memories.

Send flowers to the Thornburgh family.