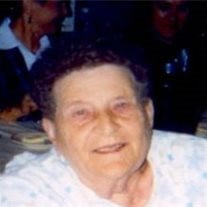 Dorothy Marie Rogers, daughter of Caleb B. Searl and Dora Gertrude Leonard Searl was born January 3, 1927 in Yale, Iowa and died October 4, 2008 at Iowa Methodist Medical Center in Des Moines, Iowa at the age of 81 years, 9 months, and 1 day. Funeral services were held 10:00 a.m. Thursday, October 9, 2008 at the Church of Christ in Yale. Words of Comfort were by Eugene Lockling from the Church of Christ in Yale. Honorary casket bearers were Jim Jones, Mike Stolz, Gerry Drake, and Kevin Kirtley. Casket Bearers were Tom Moore, Mike Dougan, Robert Book, Benji Searl, Rich Peters and Bryan Dougan. Amazing Grace and The Old Rugged Cross were played during the service. Interment was in The Brethren Cemetery, Panora, Iowa. Dorothy graduated from Yale High School in 1944. She married Everett Calvin Rogers and they lived north of Jamaica and in Panora for a time. During the war Dorothy worked at Solar Plant in Des Moines. Dorothy was a cook and janitor at the school, and cleaned houses. She ran the concessions for Bingo, co-owned the Yale Caf�, and worked at the Hide-Away in Panora and Hy Bred Egg Processing in Yale. Dorothy enjoyed gardening, being involved in the ladies group at church, sewing, crafts, embroidery, and pets. She was a member of the Church of Christ in Yale, OES, Pythian Sisters, Federated Women's Club, and a member of the American Legion Auxiliary. She was preceded by her parents; husband; son, Raymond; brothers, Benny and Ralph Searl. Dorothy is survived by her sons, Randal Rogers of Yale, and Robert Rogers and his wife Debra of Bayard; 7 grandchildren; 9 great-grandchildren; and sister-in-law, Betty Searl of Yale; nephews; nieces; cousins; other relatives and friends. Everyone was invited for a time of lunch and fellowship at the Yale Community Center following the service at the cemetery. Memorials are suggested to the church or the Yale Community Building and may be left at Hastings Funeral Home. Hastings Funeral Home 1417 2nd Street Box 204 www.hastingsfh.com [email protected] Perry, Iowa 50220 515-465-4691

The family of Dorothy M. Rogers created this Life Tributes page to make it easy to share your memories.

Send flowers to the Rogers family.