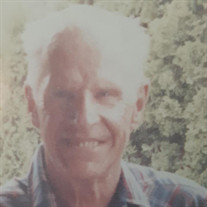 Hastings Funeral Home in Jefferson is in charge of arrangements for Donald Raymond Knight, 91, of Jefferson. Donald died April 3, 2022 at Thomas Resthaven in Coon Rapids. Graveside Services will be held 10:30 a.m. Friday, April 8, 2022 at the Jefferson Cemetery. Donald Raymond Knight, son of Floyd Knight and Edna Samuelson Knight, was born May 8, 1930 in Ames, Iowa. Donald grew up in Boone, Iowa where he attended school. On May 5, 1953 he joined the United States Army and was honorably discharged on April 29, 1955. In 1958 Donald started working at Ideal Manufacturing in Jefferson. He met the love of his life Donna Lee Rosenbeck at the Open Bible Church in Guthrie Center. The two were united in marriage on November 21, 1961 in Lincoln, Nebraska. They were blessed with three sons, Duane, Andy, and Ricky. Donald and his family lived in Panora, a farm house near Yale, and then in Jefferson. He worked on the farm for many years. Donald played the bass guitar in a band called Bob Creiger and the Wes-tones. The Old Timers Band would entertain the residents at nursing homes. Donald went duck hunting every year up until this last year. After retirement Donald worked parttime whenever he wanted. He was a man of all trades and would help out with just about anything. Donald was preceded in death by his parents, his wife Donna in 2015, son Duane, brother Ron “Sonny”, and sisters Delores, Carolyn Muzney, Janice Ott, and Shirley Cummings. He is survived by his sons Andy of La Vista, Nebraska and Ricky of Jefferson; grandchildren: Brad Wolf, Brian Wolf, Melissa Davis (Justin), Megan Panos (Shane), Madison Knight and Cassie Knight; great-grandchildren: Aubrey, Mia, Gavin, Marley, Merrick, Chloe, and Maia; brother Bob Knight (Nell) of Jefferson; other relatives and friends. DIRECTIONS TO WATCH LIVE STREAMING 1. Go to your web browser and type in www.facebook.com/hastingsfuneral 2. Or type in Hastings Funeral Home Perry, Iowa 3. Click on our funeral home website 4. Click on the blue bar that says WATCH VIDEO It should say LIVE in red up in the left hand corner of the video

Hastings Funeral Home in Jefferson is in charge of arrangements for Donald Raymond Knight, 91, of Jefferson. Donald died April 3, 2022 at Thomas Resthaven in Coon Rapids. Graveside Services will be held 10:30 a.m. Friday, April 8, 2022 at the... View Obituary & Service Information

The family of Donald Raymond Knight created this Life Tributes page to make it easy to share your memories.

Send flowers to the Knight family.