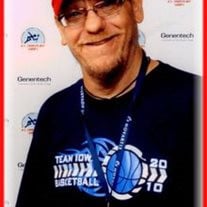 David Allen Gutz, son of Louis Allen Gutz and Lorna Mae Anderson Gutz was born December 1, 1963 in Fort Dodge, Iowa, and died November 11, 2010 at his home in Jefferson, Iowa of kidney complications. David was 46 years old. He received his education in Omaha. His family lived in Pocahontas, Iowa until 1965 and then moved to Jefferson until 1975. David returned to Jefferson in November of 2005. He was an Executive Chef in The Woodlands, Texas, Jackson Hole, Wyoming, and at the Radisson Hotel in Kansas City, Missouri. In addition to cooking, David enjoyed golf, poker, and NASCAR. He was a Nebraska Huskers fan and enjoyed volunteering at the Raccoon Valley Golf Club in Jefferson. David underwent kidney transplant surgery September 16, 2007 at Mercy Hospital in Des Moines. He felt it was his gift of life and participated in donor awareness. David was a member of U.S. Transplant Games, taking part in the activities in Pittsburg, PA and Madison, WI where he won a gold medal in golf. He was preceded in death by his grandparents, brother Douglas Louis Gutz September 29, 1987 and his mother Lorna Mae Gutz November 30, 2001. David will be lovingly remembered by his father Louis Gutz of Omaha, NE; sisters Pam Mentzer and husband Don of Jefferson and Pat Thielen and husband Terry of Kansas City, Missouri; nieces Kari Liggett and husband Jared of Olathe, Kansas and their daughters Sadie and Evie; and Jill Mentzer of Ankeny, IA; aunts and uncles Viviette McCormick of Pocahontas, IA; Robert Anderson and wife Maria of Omaha, NE; Karen Whistler and husband Don of San Diego, CA; and Charlotte PeCoy and husband Burlyn of Fort Dodge, IA; cousins, other relatives and many friends. David's wishes for cremation have been followed and burial of his cremains will be in the spring at Pomeroy Union Cemetery, Pomeroy, IA.

The family of David Allen Gutz created this Life Tributes page to make it easy to share your memories.

Send flowers to the Gutz family.