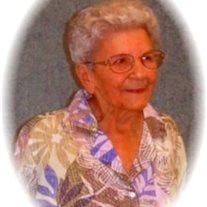 Darlyne A. Quick, daughter of Leo William Tasler and Marie Josephine Tasler, was born February 9, 1924 on the family homestead near Yale, Iowa, and died October 29, 2010 at the Panora Nursing and Rehabilitation Center in Panora, Iowa at the age of 86. Darlyne graduated from Yale High School and was chosen to attend business school in Washington, D.C. While there, she met and married William Rilea on August 26, 1942 at Francis Asbury Church. After Bill's time in the service, the couple lived in Omaha where Darlyne worked as an executive secretary for Jubilee Manufacturing for seventeen years. Darlyne was united in marriage with Dale Quick on March 13, 1959 in Omaha. The family moved to Dexter in 1962 where she worked for Drew's Chocolates for many years. After her father's death, Darlyne returned to the farm to help her mother. She worked for the Woodard State Hospital School for ten years, retiring July 7, 1989. Darlyne was a member of St. Joseph Catholic Church in Jamaica for many years before it closed. She then attended St. Patrick Catholic Church in Perry. Darlyne had many interests and good qualities. In addition to her family, she cared for many others. Darlyne was an active member of the Jamaica Community Center, calling Bingo and enjoying the monthly Birthday Club. She was an avid gardener and raised beautiful flowers. She enjoyed sharing her floral arrangements with her church. Darlyne enjoyed fishing, garage sales, reading, and all types of music. She loved collecting angel pins and would share them, many times with strangers who admired hers. Darlyne also liked an occasional motorcycle ride. She was preceded in death by her parents, her daughter-in-law Wanda Rilea on April 8, 2002, and numerous aunts and uncles. Left to treasure Darlyne's memory are her sons Mark Rilea and his wife Terri of Granger, Iowa; Rick Rilea and his wife Rita of Stuart, Iowa; daughters Michelle Willenborg and her husband Dave of Elkhorn, Nebraska, and Dana Millaway and her husband Doug of Avon, Minnesota; numerous grandchildren, great-grandchildren, and great-great-grandchildren; her aunt Bertha Soy of Lake City, Iowa, other relatives and many friends.

Darlyne A. Quick, daughter of Leo William Tasler and Marie Josephine Tasler, was born February 9, 1924 on the family homestead near Yale, Iowa, and died October 29, 2010 at the Panora Nursing and Rehabilitation Center in Panora, Iowa at the... View Obituary & Service Information

The family of Darlyne A. Quick created this Life Tributes page to make it easy to share your memories.

Send flowers to the Quick family.