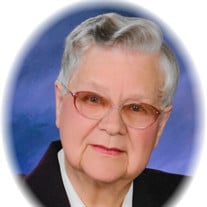 Services for Darlene Delores Brink were held 11:00 a.m. Monday June 17, 2019 at the Trinity Lutheran Church in Perry with visitation starting at 10:00 a.m. Pastor Ken Bose provided words of comfort. Casket bearers were: Melissa Larson, Sean Brink, Dani Brink and Christopher Brink. Music selected was “In The Garden,” “Beautiful Savior” and “Rock of Ages.” Scriptures were: Isiah 40:8, 1 Corinthians 2:6-10a and John 14:1-7. Following the service was a luncheon at the church. Interment took place at Dow City Cemetery in Dow City, Iowa. Hastings Funeral Home in Perry was in charge of these arrangements. Darlene Delores Brink, daughter of Ralph A. Weems and Clara Kruger Weems, was born December 19, 1931 in Crawford County, Iowa and died June 11, 2019 at her home in Perry, Iowa at the age of 87. Darlene grew up in Dow City, Iowa where she attended Arion School. On June 26, 1949 Darlene and Chris Brink were united in marriage. They made their home in Arion, Iowa and were blessed with three children Donovan, Rocky and Vickie. The family moved to Charter Oak, Iowa where Darlene worked at the meat counter for twenty-three years. Then they moved to Jackson, Minnesota; Austin, Minnesota and finally to Perry, Iowa in 1979. Darlene enjoyed flowers, reading newspapers, crossword puzzles and meeting her railroad friends for coffee. She was an Iowa State Basketball fan and also liked to watch the NBA and college games. For thirteen years Darlene and Chris summered from April to October in Spirit Lake, Iowa. Darlene was a member of the Garden Club, Trinity Lutheran Church and the Lutheran Ladies Aid. Darlene was preceded in death by her parents Ralph and Clara, husband Chris (01/24/2003), and step-dad Harold Crouch. Darlene is survived by her sons Donovan Brink and his wife Salina of California and Rocky Brink and his wife Karen of Thermopolis, WY; daughter Vickie Brink and her partner Marcia of Grimes, IA; four grandchildren: Melissa Larson, Brandon Brink (Alexa), Christopher Brink (Nessa) and Sean Brink (Dani); sixteen great-grandchildren; brother Larry Weems (Diane) of Vinton, IA and sister-in-law Macky of Onawa, IA. Memorials are suggested to the Perry Garden Club and can also be sent to Hastings Funeral Home for the family.

The family of Darlene Delores Brink created this Life Tributes page to make it easy to share your memories.

Send flowers to the Brink family.