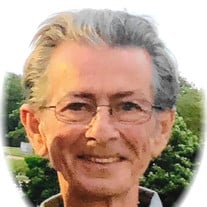 DANNY WAYNE SEASE BORN January 24, 1949 Jefferson, Iowa DIED July 6, 2019 Des Moines, Iowa AGE 70 Years, 5 Months, 12 Days FUNERAL SERVICE 12:00 Noon, July 10, 2019 Hastings Funeral Home Perry, Iowa WORDS OF COMFORT Pastor Gregg Davison Calvary Tabernacle Church Perry, Iowa RECORDED MUSIC Whole Lotta Love On The Line ~ My Old Man You are invited to join the family immediately following the service for lunch and fellowship in the funeral home lounge. Danny Wayne Sease, son of Cecil Wayne Sease and Darlene Myrtle Mae Compton, was born January 24, 1949 in Jefferson, Iowa. Danny died Saturday, July 6, 2019 at Iowa Methodist Hospital in Des Moines, Iowa. He was 70 years old. Danny grew up in Bayard, Iowa and attended school in Bayard. He immediately started working for Quad States Construction and was employed there for several years until the business closed. Danny then worked for Farmers Coop in Bayard and later worked at the Wiese Corporation in Perry for three years. Danny retired after 14 years from Lemar Construction. He was foreman of the construction crew which worked all over Iowa, when driving through the state, one can catch site of the many grain elevators, this crew built. Danny’s crew poured thousands of yards of concrete (slip forming??) Danny was united in marriage with Paula Ann Hamman on April 11, 1970. The couple was blessed with two children Danelle and Daniel. The family made their home in Bayard where he volunteered with the Bayard Fireman when his work schedule allowed. His greatest love was his family and the addition of his four grandchildren added to his joy. Danny enjoyed the outdoors and was happy hunting and fishing. A very special part of his life was “Primrose Hunting”, land he owned in southern Iowa. Perhaps the reason it was so special was because it was a place for his family to gather and enjoy its beauty. Danny was preceded in death by his parents, Cecil and Darlene Sease; sister Linda; and father-in-law Bill Hamman. His memory will be cherished by his wife Paula; daughter Danelle Noel (Jason) of Polk City; son Daniel Sease (Jennifer); grandchildren Jacob and Katelyn Noel of Polk City; Lauren and Logan Sease of Ankeny; brother Ben Sease (Becky) of Yale; sisters Diane Hood (Bill) of Carroll; Sandy McAlister (Rod) of Jewell and Mickey Farrell (Larry) of Tampa, FL; mother-in-law Gladys Hamman of Perry; sisters-in-law Judy Sorber (Ron) of Perry; and Debbie Heater (Steve) of Gilman; nieces, nephews, cousins, other relatives and friends. Memorial in his name, may be sent to Hastings Funeral Home Box 204 Perry, Iowa 50220.

The family of Danny Wayne Sease created this Life Tributes page to make it easy to share your memories.

Send flowers to the Sease family.