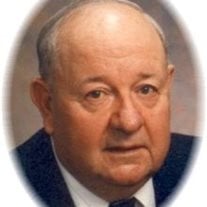 Francis Dale Grow, son of Frederick Arthur Grow and Sadie Ellen Hemm Grow, was born September 23, 1917 in Woodward, Iowa and died March 11, 2006 at the Madrid Home in Madrid, Iowa at the age of 88 years, 5 months and 18 days. Dale as he was well known grew up on a farm north of Woodward. His family later moved to a farm Southwest of Perry where he attended country school and graduated from Washington Township School in 1935. In January of 1942, Dale entered the U.S. Army. Dale was a member of the 33rd Armored Division and spent several months in England, training and waterproofing their tanks. They moved through northern France toward Belgium. It was a miserable time for them, incurring Army rations, no baths, and the loss of many tanks and comrades. They eventually entered Nazi Germany with eleven tanks. Dale was wounded when his tank was hit by enemy fire. He and others were taken prisoner. Dale spent the next 10 months in German hospitals and in a prisoner of war camp where starvation, bugs, disease and bitter cold were the norm. Dale and his comrades were liberated by British forces, but before being sent home to Schick Hospital in Clinton, Iowa, he spent 21 days in quarantine because of the yellow jaundice he had contracted. Dale was honorably discharged from the Army in December of 1945. Dale was very willing to share his experiences and memories with youth throughout the area. He wanted them to know that we must vote for good leaders, to support our country and respect the flag. On April 18, 1943 Dale was united in marriage to Annabelle May Gardiner in Harrisburg, Pennsylvania. They were the proud parents of 2 children: Nancy and Darwin. After being discharged from the service the family made their home on a farm N.E. of Jamaica where he farmed for six years. In 1952 they moved to a farm east of Bagley where they lived for 24 years. While living in Bagley, Dale drove a school bus for the Bagley Schools for 14 years. In 1976, they moved to Dawson and in 1980, Dale began to work as a janitor at the Dawson Building, before retiring in 1985. Dale liked to visit with family and friends. He also was very interested in Antique Ford Tractors. Dale also liked camping and he and Annabelle were active with the Greene County Campers. Dale was a member of the Church of Christ in Yale, a dedicated member of the Ex-POW Mid Iowa Chapter. He was also a 50 year member of the Rippey American Legion and had been a Farm Bureau member. Dale was preceded in death by his parents; his grandson Eric Grow; and 2 brothers: Lester and Clifford He is survived by his wife Annabelle; his daughter Nancy Grow of Des Moines; his son: Darwin Grow and wife Pam of Bagley; one grandson: Cory Grow and wife Emily of Jefferson; great-granddaughter: Madison Grow; nieces, nephews, other relatives and many friends.

Francis Dale Grow, son of Frederick Arthur Grow and Sadie Ellen Hemm Grow, was born September 23, 1917 in Woodward, Iowa and died March 11, 2006 at the Madrid Home in Madrid, Iowa at the age of 88 years, 5 months and 18 days. Dale as he was... View Obituary & Service Information

The family of Dale Grow created this Life Tributes page to make it easy to share your memories.