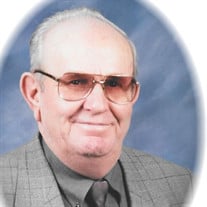 A Prayer Service for Dale Stanley Christensen was held 6:30 p.m. Thursday, February 7, 2019 at Hastings Funeral Home in Jefferson. Visitation started at 5:00 p.m. until time of service. Rev. Dennis Martens of the Trinity Lutheran Church in Jefferson provided words of comfort. Casket bearers were: Mike Christensen, Eric Hink, Adam Connell and Aaron Barton. Recorded music selected was: Rock of Ages, How Great Thou Art, Amazing Grace, You’ll Never Walk Alone and Peace In The Valley. Graveside Service and interment took place 10:30 a.m. Friday, February 08, 2019 at the Scranton Township Cemetery in Scranton, Iowa. Dale Stanley Christensen, son of Niels Maurice Christensen and Martha Johnson Christensen, was born December 18, 1928 in Frys, Saskatchewan, Canada. Dale passed away February 2, 2019 at the Long Term Care Unit of the Greene County Medical Center in Jefferson, Iowa at the age of 90. Dale grew up with two brothers and a sister. His family moved to Scranton, Iowa when he was four years of age. Dale attended school in Scranton and later moved with his family to California where his father worked in a shipyard during the war. Dale eventually worked in the shipyard, too, and went to trade school. He joined the U.S. Navy February 21, 1946 in San Francisco, California and spent 18 months in Guam. Dale was honorably discharged December 23, 1947 in Alameda, California and returned to this area where he met his future wife Reva Huss at a dance in Grand Junction. Shortly after, the happy couple was married on April 22, 1950. Dale did bridge construction which took him to various areas. He later took a job in Scranton so the two could start a family. Dale remained at this job for four years until he got his job at the Scranton Elevator. He was a faithful employee of the elevator, working in their fertilizer department for twenty six and one half years before he retired. Dale and Reva adopted Mike and then two years later adopted Jana. They were loving and devoted parents and eventually proud, loving grandparents. Dale was blessed 19 months ago, becoming a great grandpa to Aurora. He adored her. Dale and Reva were active members of Peace Lutheran Church in Glidden and after moving to Jefferson in 1989 joined Trinity Lutheran Church. Dale served his church in many ways including being a trustee through remodeling projects and as an usher and choir member. As a couple they enjoyed time with family and traveling. Dale and Reva had taken trips to Canada, Denmark, California and Washington to visit Dale’s brother. Dale had served as a volunteer fireman and on the rescue unit while they lived in Scranton. He also had liked to fish and hunt. Reva died in 2003 and Dale was supported over the years by his family and his church family. Dale was proud to call Long Term Care his home for 9 years and was very appreciative of the loving care he received from the staff. Somewhat summing Dale up, he was a very loving father, grandfather, and great grandpa, proud Dane, and great Hawkeye fan! Dale was preceded in death by his parents, his precious wife Reva, his brothers Floyd and his wife Trudy, Wayne and his wife Marion, and his sister Alma Harvey and her husband Don. He is survived by and will be deeply missed by his son Mike and his wife Carol of Jefferson, his daughter Jana Barton of Sioux City, Nebraska, granddaughters Spencer Hink and her husband Eric of Granger, Ryanne Connell and her husband Adam of Iowa City, Kaitlin Barton of Citrus Heights, California, grandson Aaron Barton of Sioux City, Nebraska, great-granddaughter Aurora Hink of Granger, sister-in-law Virginia Christensen of Cheyenne, Wyoming, nieces, nephews, other relatives and friends. Memorials in his name will be designated by his family to his favorite charities and may be left or mailed to Hastings Funeral Home.

The family of Dale Stanley Christensen created this Life Tributes page to make it easy to share your memories.

A Prayer Service for Dale Stanley Christensen was held 6:30 p.m....

Send flowers to the Christensen family.