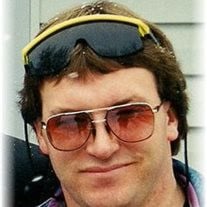 Funeral Services were held for Craig Allen McDowell, son of Gary Neil McDowell and Jaclynn Sue Rutenbeck McDowell, was born December 10, 1968, in Perry, Iowa and died Monday, March 2, 2009 in Perry, at the age of 40 years, 2 months and 22 days. A Service Of Remembrance was held at 7:00 p.m. Friday March 6, 2009at Hastings Funeral Home in Perry, Iowa. The Rev. R. D. Streeter of the Staves United Methodist Church Des Moines, Iowa gave the Message. The Honorary Bearers were Andy Bock, Richard Lonsdale, Gary Snowgren, Mikey Anderson, Robert Muir, Bobby Muir, John Muir and Ken Muir. The special music was I Will Remember You, The Dance, and Go Rest High On The Mountain with the Interment in the Dallas Twp Cemetery, Dawson, Iowa. A time of refreshments and fellowship followed in the lounge. Craig grew up in Dawson and graduated from Perry High School in 1987. Craig enjoyed hunting, fishing and camping. He had worked at Progressive Foundry, Osmundson Mfg. Co, and Bock Tree Service. He had also worked for Muir Brothers and other area farmers. Craig's passion was working on the farm and tractors. Craig had lived in the Perry and Dawson area all of his life. Craig was preceded in death by his dad, Gary, his grandparents, and brother, Bruce. He is survived by his mother, Jaclynn, of Des Moines; sister, Becky Tjaden, and her husband, Bryan, of Ankeny along with their sons Corey and Cole; and brother, Randy, of California; sister-in-law, Elaine, and her children Amanda, Heather and Neil of Jefferson; an aunt, Barb Cole, and her husband, Kurt, of West Des Moines; other relatives and friends.

The family of Craig Allen Mcdowell created this Life Tributes page to make it easy to share your memories.

Send flowers to the Mcdowell family.